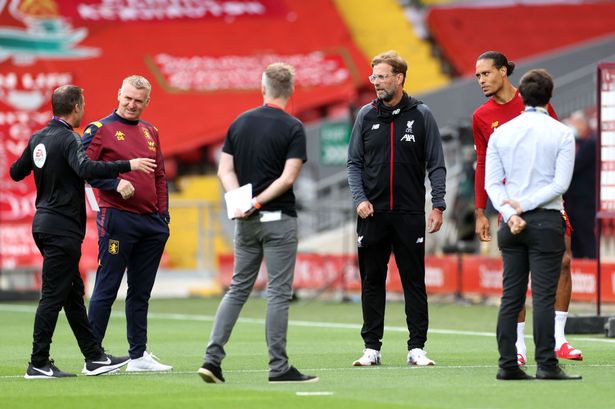 The UK is in the middle of a fresh lockdown clammed by the government due to the rising cases of the new coronavirus strain. Amid, there is a growing concern among football fans of several matches being canceled.

Now, Aston Villa’s match against Liverpool on Friday in the FA Cup third round is also in jeopardy. If manager Dean Smith does not manage to field 14 fit players, it will mostly be called off. The club had reported a “significant coronavirus outbreak” at their training ground.

Villa beat Liverpool 7-2 at Villa Park in the Premier League earlier this season. Now they are all set to host Jurgen Klopp’s side in one of the outstanding fixtures of the round.

But this exciting tie is in serious doubt as Villa is staring at abandoning the match completely if they are unable to fulfill the Football Association’s minimum requirement of 14 fit players, including youth-team players in order to play the Premier League champions.

The English Football Association on Thursday issued a statement saying a final decision will be made on Friday.

“The Football Association and Aston Villa are working closely together to try to ensure that the club’s Third Round Proper fixture with Liverpool can go ahead as planned at Villa Park tomorrow evening,” the FA statement said.

Even Villa released a statement earlier on Thursday.”Aston Villa can confirm that the club has closed its Bodymoor Heath training ground after a significant coronavirus outbreak.”

The club also mentioned that several first team players and staff returned positive after being routinely tested on Monday and were immediately sent into isolation.

“A second round of testing was carried out immediately and produced more positive results today,” said the statement read.

“First team training ahead of tomorrow’s FA Cup match with Liverpool was cancelled.

Due to the current rise in COVID-19 infections in the UK, Southampton’s third round tie against Shrewsbury on Saturday has already been pushed back because of an outbreak at the EFL League One club.