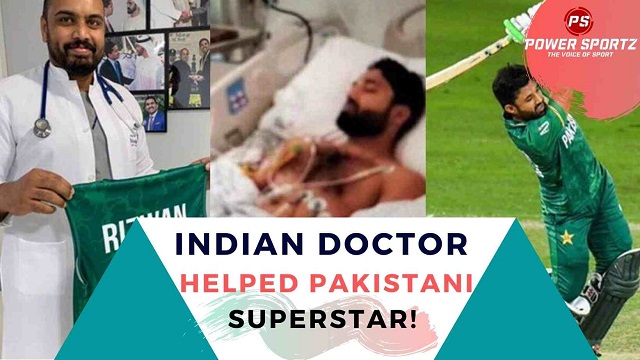 Indian doctor who assisted in putting Pakistani cricketer; Mohammad Rizwan back on his feet a day before the World Cup Semifinal in Dubai complemented the wicket-keeper batter’s; indomitable spirit and perseverance while battling a serious chest infection on an ICU bed. The Indian doctor who worked in the Medeor hospital as a ‘pulmonologist’ specialist praised Rizwan’s dedication; He recalled that the wicketkeeper kept expressing to the team of doctors that “Mujhe Khelna he. Team ke saath rehna he, (I want to play and be with the team).” The Indian doctor further commented that “Rizwan had a strong desire to play for his nation in the crucial knockout match. He was strong, determined, and confident. I am astonished at the pace he had recovered.”

Despite having recovered one day before the cup. The wicketkeeper was phenomenal in the semifinals of the cup; Rizwan managed to add 67 runs for his country; and helped them put up a total of 176 runs. However, his team’s bowling was poor on the day; which resulted in Pakistan losing the match. Pakistan lost the match by 5 wickets in the second last over of the match.

When does Pakistan play their next T20 match?

It remains to be seen if Pakistan can beat Bangladesh ….