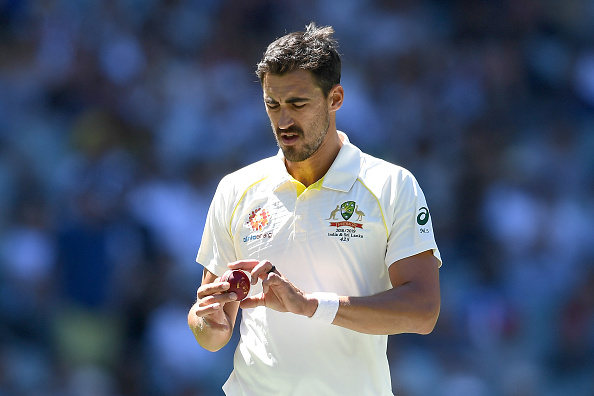 Mitchell Starc, the Australian quick, is still hopeful of playing in the ODI series against Sri Lanka, but only if it doesn’t jeopardise his Test hopes.

With a finger injury, Australia’s fast bowler wants to play in the present One-Day International series, but not at the expense of his Test spot.

Meanwhile, Australia lost their yesterday’s clash against Lanka, who were able to secure a 26-run win to level the 5 match ODI series at 1-1.

Mitchell Starc comments on his return

During his follow-through in the T20I series opener last week, Starc slashed open his left index finger on his shoe spike.

In recent days, the 32-year-old has been able to bowl at full speed in training.

But due to ICC rules prohibiting bowlers from wearing tape on their fingers, Starc has been unable to play in games.

Starc had his sutures removed on Thursday, but how well his finger recovers from here will determine if he is fit to play in the third ODI against Sri Lanka on Sunday.

He hopes to play some part in the five-match series, but only if it does not jeopardise his prospects of appearing in the two Tests that follow.

“I’m still holding onto hope that I will,”

Starc said of his chances of featuring in the ODI series.

“There’s still a fair bit of glue still in the wound. That will start to dissolve a bit more in the next couple of days.”

“Once we get to Colombo we’ll have a look at it again and see where it’s at.”

“it was frustrating to feel super fit and still unable to play.”

Meanwhile, Marcus Stoinis (side strain), Sean Abbott (finger), and Kane Richardson (hamstring) are all out,

While Ashton Agar (side strain), Starc, and Mitchell Marsh (hamstring) will also be missing the ODI series.

In Friday’s 26-run ODI loss, star batsman Steven Smith gave the camp a scare when he pulled up limp while dashing for a second run.

He was able to continue playing after having strapping on his upper left leg, but he will be evaluated over the next few days.

“I don’t know how sore he is or how much of a niggle he might be,” Starc said.

“After he got the strapping he played a pretty nice drive through mid-wicket, so I’m sure he’ll be fine to play the next game.”