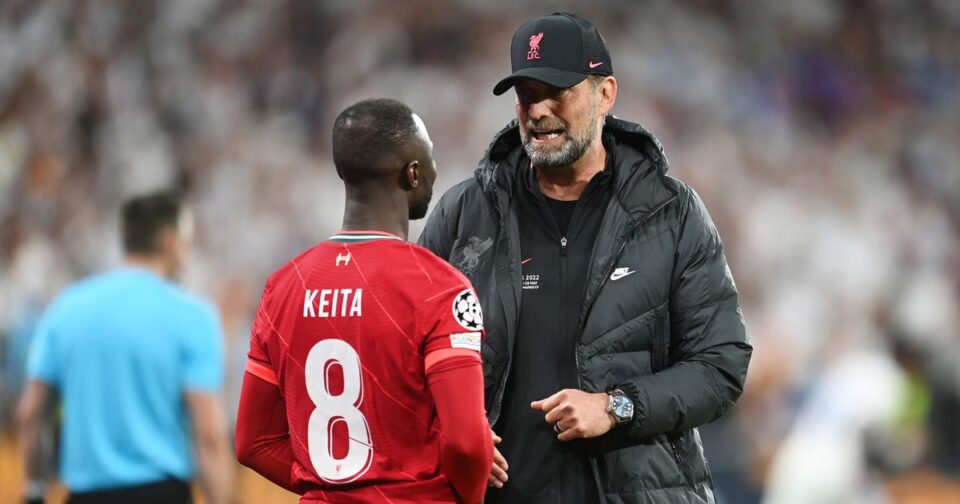 Naby Keita won’t be leaving Anfield before the end of the summer transfer season, according to Liverpool manager Jurgen Klopp. The 27-year-old has yet to play in a Premier League minute this year, and in the Community Shield at the end of July, his only appearance was a five-minute cameo against Manchester City.

According to a recent rumour, Keita was pondering his future at Anfield and was open to the thought of switching teams before the transfer window closed.

“And not replace him? No, that’s not possible, of course not. But it’s not the plan. We are not dumb that we think a player can go and we don’t replace him.”

“No, there’s no chance. So, Naby will not go but if he would – what he will not do – there must be a replacement, of course,”

Although Klopp has claimed that he is pleased with his alternatives in the middle of the field for the 2022–23 season, the German coach is currently dissatisfied with the team’s injury situation.

“Yes [I am happy], when they are all fit, 100%. But even then we always look to strengthen, we have to and we always did. It must be the right player and if the right player is not available in this moment then we tend to say, ‘OK, then we deal with what we have before we sign a player who is not 100% right.’ This situation never changed,”

“Now we have more injuries than we would have imagined and now it would be cool to have a new midfielder in, of course – but for now, and then we don’t know when the boys come back and the situation changes constantly.”

“You can just not do that and then there is another fact: I am, we are, not in charge of what we can spend. That’s the situation and we get told things and then we deal with that. It was always the same and never different.”

The German coach is now upset with the team’s injury problem despite maintaining that he is satisfied with his choices in the middle of the field for the 2022–23 season. Liverpool’s midfield options are now limited by the absences of Higo Alcantara, Curtis Jones, and Alex Oxlade-Chamberlain.

Jude Bellingham is reportedly the Reds’ top midfield target, and the club is preparing to make a bid for the young Borussia Dortmund player in 2023.

Jude Bellingham is reportedly the Reds’ top midfield target, and the club is preparing to make a bid for the young Borussia Dortmund player in 2023.

But according to a recent source, Real Madrid was considering making a high-profile move for the England international using the money from the sale of Casemiro to Manchester United.

Liverpool drew consecutive matches at Craven Cottage and Anfield against Fulham and Crystal Palace to start the 2022–23 Premier League season.

When Klopp’s team travels to the bottom-of-the-table Man United on Monday night, they will be seeking to pick up their first victory of the new campaign.