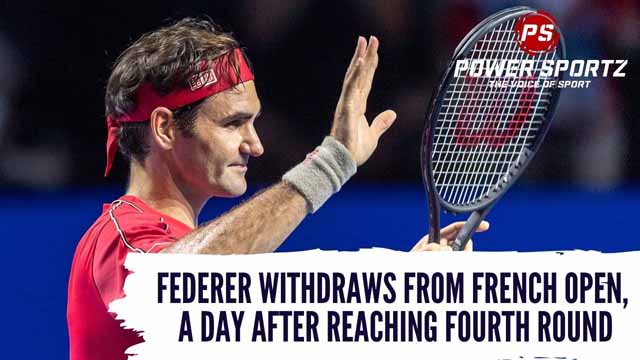 Roger Federer had always been vociferously clear: His goal was Wimbledon.

Grass is where  he knows he  has the best chance to shine: the grass at Wimbledon, where short points and his unrivaled experience mean a ninth title at 39, is not ruled out by any standard

Soo, did his decision to withdraw, really come as a surprise?

“After two knee surgeries and over a year of rehabilitation, it’s important that I listen to my body and make sure I don’t push myself too quickly on my road to recovery,” Federer said in a statement. “I am thrilled to have gotten 3 matches under my belt. There is no greater feeling than being back on court.”

From a brand perception and eyeball point of view, For Roland-Garros, Federer’s withdrawal is a beating. A worry, if the crowds’ engagement levels would dip, is something which may be giving Roland Garros organizers, sleepless nights!

But, when any player is on the wrong side of his thirties, needs to doubly have his thinking hat, on, always.  If he still nurtures a Wimbledon victory,  he needs to be 100%.

Coming off two arthroscopic right knee surgeries, Federer must have been looking for a platform to regain his form and hone his skills to be ready for what lies ahead

He seems satisfied with wins over Denis Istomin, Marin Cilic, and finally Koepfer on Saturday night, proving to himself his skills were still there.

His endurance too was put to test. His almost 4-hour four-set win over the German was a testament to Federer’s underlying form. Performance on grass is almost a given with this level of stamina and fitness

Andy Murray, who himself is familiar with injuries and a return back on court, said”Id argue that it’s quite risky to play multiple four-hour matches in a row in your [third tournament] back in 18 months so to me it makes sense to be reactive based on how your body feels, length of matches etc,” he said. “Sensible decision from him.”

Many at Roland Garros did not like this tournament to be considered as a practice ground for the Wimbledon.

He could have chosen not to play at all at Roland-Garros and instead practiced on grass, but then he would not have gotten the match practice he so badly needed.

Surely, Federer knows how to manage his career. Recovering from the efforts of his third-round win to take on world No. 9 Berrettini would have been a tall order  and maybe he would have risked injury. Maybe this is his last Roland Garros, and he wanted to end on a high pedestal

Considering his stage in life, Federer cannot afford to take risks. One injury could mean the end of his career, and as Daniil Medvedev said Sunday, it’s clear where his eyes are.