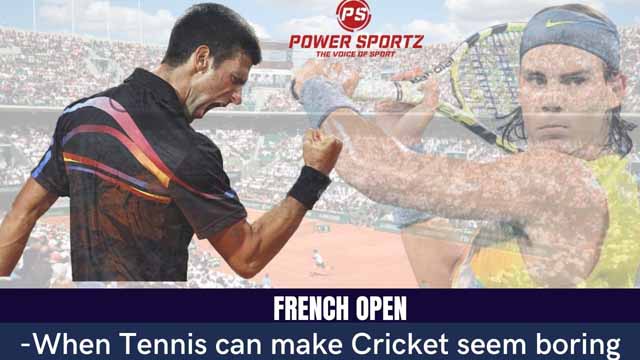 ‘It’s not over until I win’, seemed the sentiment being echoed while Rafael Nadal and Novak Djokovic produced a spell-binding show that left all watching the epic clash at the French Open mesmerized. defending champion Nadal was finally conquered  at Roland Garros — his third loss in 108 matches in Paris over almost two decades.. The Serbian World No.1 won the epic 4-hour 11-minute 3-6, 6-3, 7-6 (7/4), 6-2 to reach the final of the French Open where he will face Greece’s Stefanos Tsitsipas. Fans from across the globe bowed in awe to Djokovic and Nadal for their stunning display of tennis. Fans in India too were carried away by the moment, and it was certainly a time in history when the cricket crazy nation acknowledged the supremacy of the tennis moment

“This is not just tennis! This is benchmarking of the highest order. #NovakvsNadal” tweeted Cricketer Ashwin.

“Nadal losing the semifinal at Roland Garros after being one set UP. Bizarre Times! Inhuman effort for every single point though,” wrote Washington Sundar before tweeting: “Intensity. Sheer passion. Absolute Delight”

Dinesh Karthik remained in shock, urging fans to “watch this match in replay”.

Nadal is definitely not used to losing on clay and it was his first defeat in 14 semi-finals in the French capital.

Djokovic has more than one reason to celebrate. He becomes the first man in over 50 years to win all four Slams twice.

Coronavirus: The Delta Variant may get Sports fans to wait longer