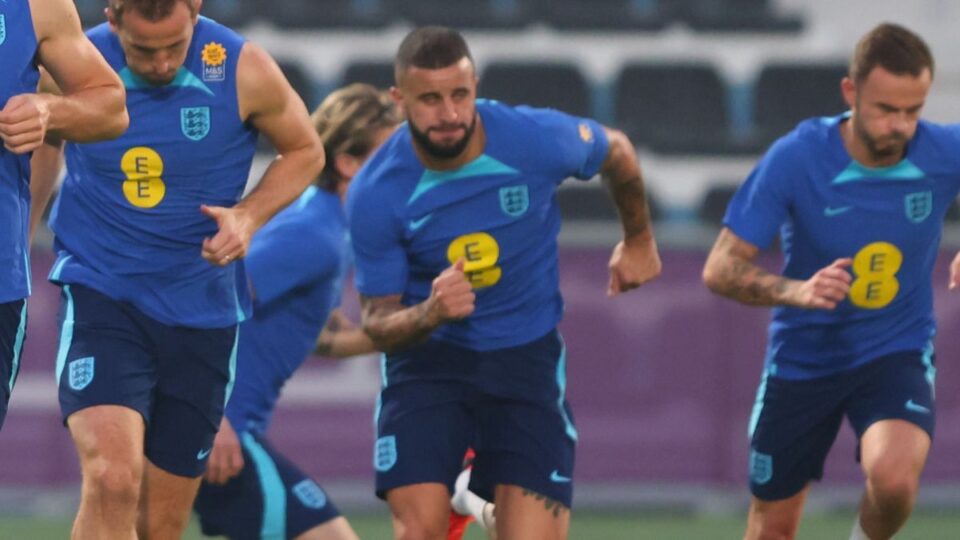 Kyle Walker has stated that he probably won’t play in England’s opening 2022 World Cup Group B match against Iran on Monday. After undergoing groyne surgery at the beginning of October, the 32-year-old right-back for Manchester City was a serious doubt for the tournament in Qatar.

Walker has nonetheless been a part of manager Gareth Southgate’s 26-man roster, and the seasoned defender was spotted working out with the first team on Wednesday at the Al Wakrah Sports Complex. Walker will be “ready before the conclusion of the group stage,”

Southgate said last week, shortly after announcing his final World Cup roster. Walker, who has 70 international caps, later said that the match against Iran might have been too soon for him, and he is now aiming for a return for England’s second Group B match against the United States.

“I think probably the first game is too short, but from then onwards I will be good and ready to go.”

“It was an operation I had and it was touch and go, but that’s full credit to the physios here and also at Man City for getting me back fit and healthy.”

“I was never worried. I always have to believe in myself. As soon as the professor said I needed the surgery, I was very confident that I made sure I prepared right, on and off the field, and did the right things correctly and moving forward I knew I would be alright.”

Walker is not the only Three Lions player dealing with injury issues ahead of the tournament in Qatar; Kalvin Phillips of Man City is also struggling to get well in time for the group stage.

Walker and the rest of the England team were seen practicing with Phillips, who has missed the majority of the 2022–23 season owing to a shoulder ailment, as well as James Maddison of Leicester City, who has recovered from a similar injury scare.

Meanwhile, after scoring in Leicester’s 2-0 Premier League victory over West Ham United last weekend, Maddison was forced off with a knee injury. The playmaker is “hopeful” he may return to the lineup on Monday.

Speaking at a press conference on Wednesday, via Sky Sports News, Maddison said:

“I’ve got to be ready when called upon. I feel like I’m in good form, in good goal-scoring form, we’ve got such a brilliant squad, you might only get that one moment to show everyone what you can do and be the man to help the team. I’ll be ready when that opportunity comes.”

“We had a scan the day before we met up which was a positive scan. I had a little problem in the week building up to the West Ham game, post-Everton game. I wanted to play (against West Ham). I didn’t want to not give it a go because of the World Cup. I wanted to help Leicester.”

“I managed to score early and carry on after that. It was a bit sore and getting worse as the game went on. I thought it was probably best for me to come off and get someone else on who wouldn’t have a problem with a full sprint. I have to do a little bit of work to get up to speed with the physios here but it should be no concern.”

“There might be a little bit of separate, extra work to make sure that’s right and not a problem because I want to be 100% if called upon. I’m hopeful I’ll be fine.”

When England plays Iran, who is now ranked 20th in the world according to FIFA, at the Khalifa International Stadium the following Monday, Maddison will be looking to earn only his second international cap.