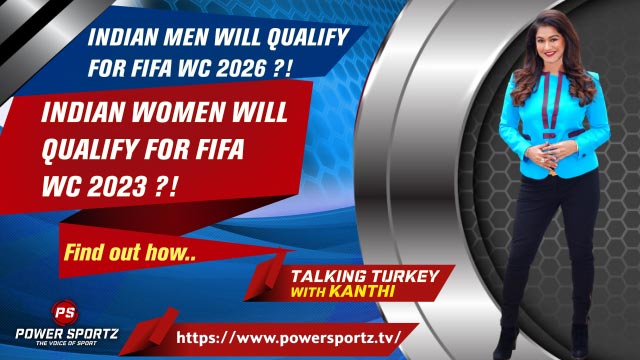 Is Indian football, be it, men or women, in the ascendant? Going by the statistics, it is certainly not. We are not even in the top 10 in Asia let alone making a mark in the international arena.

However, AIFF President Mr. Praful Patel is sanguine about the future of Indian football in the coming years. He claims that Indian women would qualify for the FIFA World Cup in 2023 ahead of the men’s team, which would follow suit in 2026 edition.

Now, how rational or pragmatic an announcement is that?

According to the principal sports debate show of Power Sportz—Talking Turkey with Kanthi, it is far from the ground reality. Helmed by Ms. Kanthi D Suresh, also the Editor-in-chief of Power Sportz, the show was joined by experts who were unequivocal in saying that “this is a hypothetical statement”.

The problem is Indian football leagues are played in closed format, which is not helping the cause at all. Even ISL, the premier tournament in the country is not going to herald Indian football into the top league. “How is ISL’s 5-foreigners format going to catapult India into the 2026 FIFA WC,” asked Kanthi D Suresh on the show that went on air on March 13.

Statistics shown on the program revealed that 75 percent of goals in the ISL are netted by the overseas players. Except for Sunil Chhetri, India doesn’t have a credible striker, said Novy Kapadia, a renowned football expert who was part of the panel on Talking Turkey.

But, AIFF officials think that they are doing a commendable job. Shyam Thapa, Chairman of the AIFF Technical Committee, said bringing in foreign players gives the much-needed exposure to our footballers.

The panel concluded that Indian football is more about recreation and it has a long way to go to establish itself as a competitive squad in international football. As the show progressed, Kanthi, in her usual incisive style conducted it to unravel so many aspects of Indian football that need to be answered before proclaiming it as on par with international counterparts.

So, if you are a football lover and want to gather more such insightful knowledge on Indian football, log on to Power Sportz and watch the full episode here.