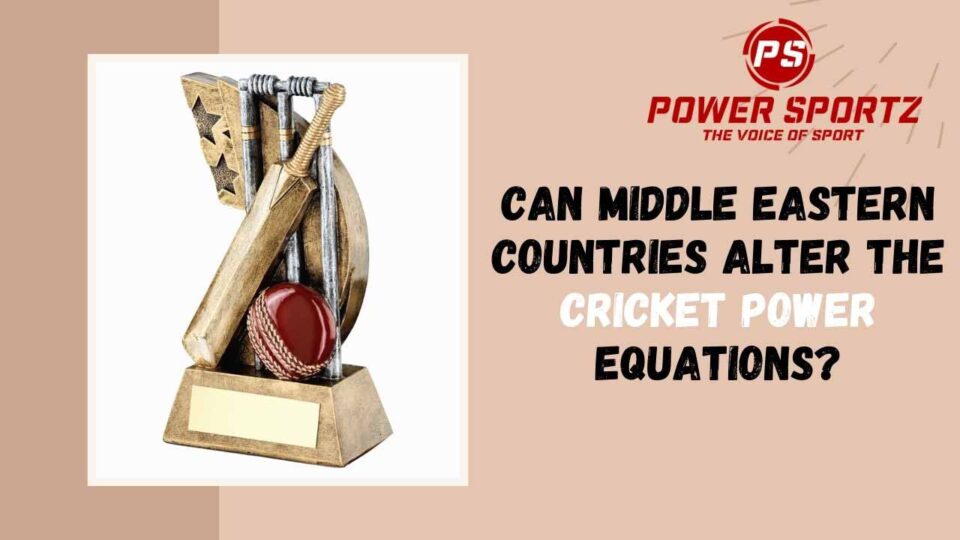 It is not common for a Country to be keen to host a big Sports  event which is either not part of its History or not played by its own countrymen. But the Middle Eastern countries seem to be breaking this misconception. Cricket, known more to be monopolized by the Big three – India, England & Australia, is seeing a paradigm shift in the Power Play! UAE appears  to be the preferred substitute destination to a Sport which is known to be played by a number of countries which is not even enough to automatically qualify to becoming an Olympic Sport. The Olympic Charter indicates that in order to be accepted, a sport must be widely practiced by men in at least 75 countries and on four continents and by women in no fewer than 40 countries and on three continents. The UAE National Cricket team has managed to appear in a T20 World Cup, once, in 2014.

The Covid 19 Pandemic has changed the consumption patterns of most people around the World. Entertainment, which hitherto meant going to restaurants, bars, theatres, sports events etc, is now being viewed from the Prism of safety, security & well-being.  Digital Entertainment seems to be the new catchword! Watch it from your home, even if its happening next door, is the current philosophy

The Middle Eastern countries seems to be looking at this differently and appear more focused on their Vision 2030, where growing themselves as Sporting hubs, forms a significant feature of the Vision plan. One is not sure whether they always wanted this opportunity, but its certain that they have capitalized on it. Leading the way in the Vaccination drive, they are at a head start in preparing for the future. Successfully hosting the IPL in 2020 during the first wave of the Pandemic and being ready to  finish the remainder of the IPL 2021 season, where India was a disaster, its clear that UAE is making dents in the tightfisted world of Cricket. They have already announced about holding their own T20 League!

Saudi Arabia and Qatar, both winning the rights to host the Asian Games ahead, is a clear indication of these countries wanting to focus on Sports other than Football, where they are already high ranked amongst all the GCC nations. While Saudi Arabia sees racing, soccer, boxing as a tool to  boost its profile and soften its image, the fact is it has an Indian Diaspora Population of over 2.5 Million in its Kingdom. With Cricket being part of the DNA of any Indian, growing Cricket may very well fit into the Saudi Sports Plan. Countries like Oman too seem to be featuring on a preferred alternative to host Cricket matches

The latest move by ICC to expand the number of teams for the T20 World Cup from 16 to 20, clearly indicates the desire to spread the Sport to many more countries, much to the discomfort of the BCCI, which clearly is happy with just a handful playing the Sport, to comfortably retain its control over Cricket Administration in the World.

With T20 making its presence from the next edition of the Asian Games, a host country would not like to miss an opportunity to capitalize on 1 billion cricket fans existing only in the Asian region. The World Tourism Organization (WTO) describes the Middle East and Africa as the world’s fastest-growing sports tourism destinations. The region has youth and money on its side: the WTO cites factors such as a young and growing population, a rapidly expanding middle class with high disposable incomes, and improved event marketing. With 1.8 billion worldwide tourist arrivals forecast for 2030  and a possible 180 million sports tourists,  Middle Eastern destinations are playing a long game on several fronts

Cricket Administration in the World has been the hegemony of the BCCI (Board of Control for Cricket in India) over the last four decades. It is a known fact that International  Cricket Council, the Worlds Governing Body for Cricket, has till date operated under the de facto rule of the BCCI. With the ICC now having a new administration and With the Middle Eastern countries now shifting their concentration and focus to Sport, it remains to be seen if the Wealthy Oil-rich nations can turn the Power Equations of the game of Cricket!