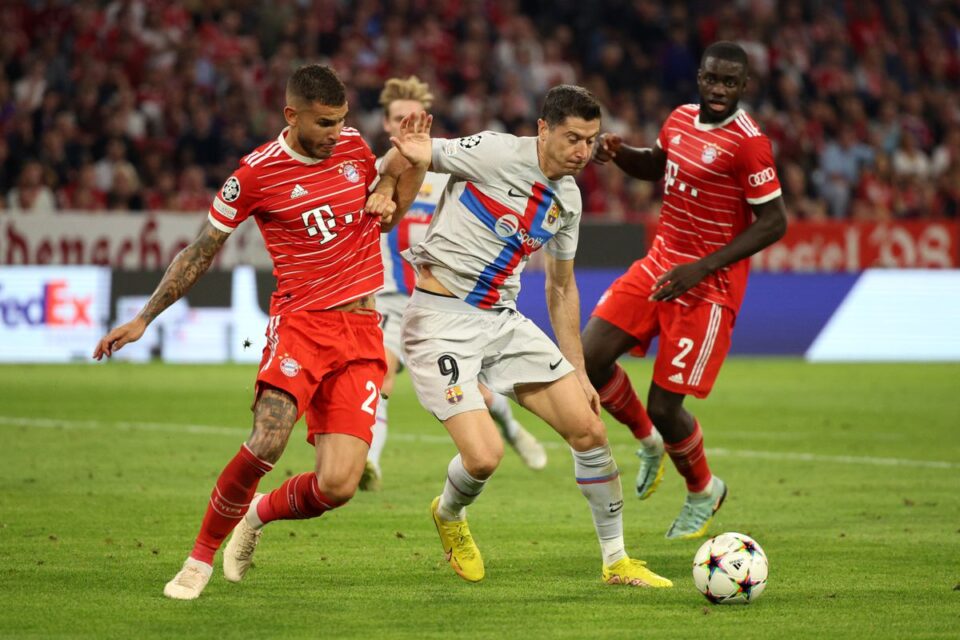 Bayern Munich won 2-0 against Barcelona in their Champions League Group C match up yesterday night at the Allianz Arena, thus, in doing so they extended their recent losing streak against rival European powerhouses.

Lucas Hernandez and Leroy Sane scored for the hosts as they defeated Barcelona for the seventh time in a row, as Julian Nagelsmann’s team scored two goals in the first four minutes of the second half.

Throughout a breathless first half, Barcelona was forced to regret a number of squandered opportunities, with the in-form Robert Lewandowski among those most responsible for squandering chances upon returning to his former club.

As Bayern brutally punished the indiscretion of the visitors, Gavi, who is rumoured to be close to agreeing to a new long-term contract with the team, also missed the post in the second half.

Due to their 3-0 home and away losses to the same team in the previous season and their 8-2 humiliation in the 2019–20 quarterfinals, Barca could be excused for fearing their trip to Munich.

However, it was Xavi’s revamped team that exploded out of the gate, forcing Bayern to withstand a siege in which Barcelona pounded their goal with 10 shots in the first half.

In the first 20 minutes, Pedri, Lewandowski, and Gavi all missed good opportunities, including a one-on-one for the returning Lewandowski that he blazed over – the kind of opportunity he made a habit of burying on his way to scoring 38 goals in 37 Champions League games at the stadium while a member of Bayern Munich.

Raphinha also came close for the visitors either side of halftime, while Marcel Sabitzer’s missed shot for Bayern was the highlight of a fun first half.

However, Bayern quickly capitalised on their let-offs after the break as Hernandez opened the scoring from a corner kick by Joshua Kimmich after Raphinha misread the ball.

Four minutes later, Sane doubled the lead after Jamal Musiala sent the ball to him. Despite the Barcelona goalkeeper getting a hand on the ball, Sane continued his impressive recent Champions League record by rushing past his defender and finishing past ter Stegen.

If Pedri had converted a chance after a smooth linkup play with Lewandowski, a Barca comeback might have been in the cards. However, with Manuel Neuer closing in on him, Pedri could only hit the woodwork.

As a result, Bayern is now in first place in Group C with a maximum of six points from six games, ahead of Barcelona on goal differential after Inter Milan defeated Viktoria Plzen earlier in the day.

Next up for Barcelona will be a clash against Elche in La Liga while Bayern will make a trip to Augsburg Arena this Saturday.