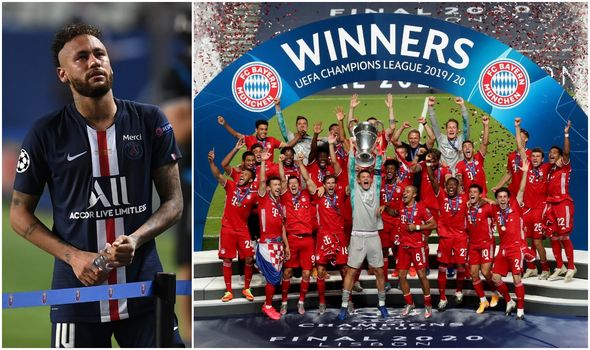 It was Kingsley Coman’s second-half goal that gave Bayern Munich a 1-0 victory over Paris St.-Germain on Sunday. The German champions had won the European soccer’s top club competition for five times before this.

Irony is, Kingsley Coman is a former PSG youth academy graduate who inflicted the blow.

The long wait for PSG to win the Champions League will continue as they have to wait for another season to make it a reality despite featuring world-class players in the squad.

Coman, a France international, appeared at the back post and head home in the 59th minute, giving Bayern a sweeping move.

For PSG it was their first European Cup final after the Qatar royal family infused billions of euros of investment. However, they failed to ascend the final step to glory.

It would be heartbreak for the Qatari owners of PSG’s as they had spent a combined 402 million euros ($474m) on Neymar and Mbappe in 2017 to get home this competition. But it wasn’t meant to be and in the end it was one who got away from Paris who denied them.

Played in an empty stadium, the game was not the usual goal fest with deafening roar all around and fans going crazy in every moment until finish. But, in the end Bayern emerged victorious in the high-competition battle.

The victory also concluded a treble of trophies for Hansi Flick’s side after they also won the Bundesliga and the German Cup.

“I am proud of this team. When I started in November I read the headlines: ‘No need to fear or respect Bayern Munich anymore’, ‘The team is awful,” said an elated Flick to reporters.

“But the development of my team since then has been sensational. We made maximum use of everything. It is not easy to win three titles. It was hard work,” he added.