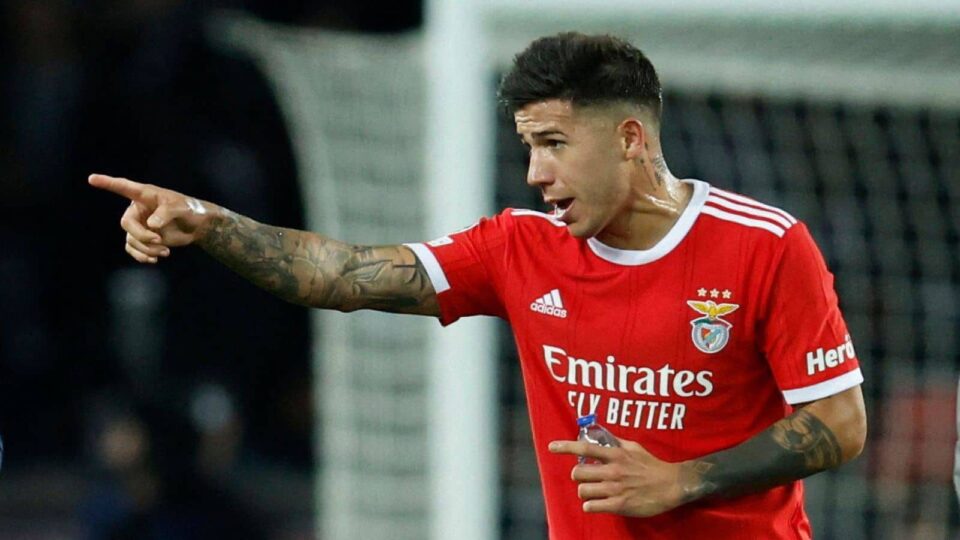 Enzo Fernandez of Benfica has apparently received a new player-plus-cash offer from Chelsea. The Blues have already signed six players for a total of close to £150 million, but they are still looking to add to Graham Potter’s roster.

While Joao Felix arrived on loan from Atletico Madrid, others have completed a long term deal with the Blues. The other 5 includes Mykhaylo Mudryk, Noni Madueke, Benoit Badiashile, David Datro Fofana, and Andrey Santos.

Potter is rumoured to be prioritising the acquisition of a new central midfielder, with 21-year-old Fernandez being a player who has been heavily connected with a lucrative transfer to West London.

Chelsea reportedly tried to recruit Fernandez earlier this month but the deal broke down. The Blues previous offer was a player-plus-cash deal of £87 million plus Hakim Ziyech, Datro Fofana, and Santos—the latter two on loan.

Although it is believed that Fernandez notified Benfica of his intention to sign with Chelsea, the Portuguese powerhouses are insistent that they will only consider bids that meet the player’s €120 million (£105.7 million) release clause.

Players included by Chelsea in the new Fernandez deal?

The 2022 World Cup champion’s rumoured refusal to leave Benfica in January, according to Benfica manager Roger Schmidt, appeared to put an end to Chelsea’s recruitment efforts.

“The Enzo story is closed, there’s nothing left. He’s our player. He’s in a good position, Enzo is happy, training well, he’s part of the team. He’s a key player. That’s all,”

Chelsea reportedly plans to reopen negotiations with Benfica in the final week of the winter transfer window, despite having given up on trying to reach an agreement in January.

According to Record through football.london, Chelsea have reportedly made a second offer in the neighbourhood of €100 million (£87.8 million) plus “players,” though the names of those included have not been made public.

With four goals and seven assists in 28 appearances since joining Benfica from River Plate in the summer, Fernandez has had a strong start to life in Portugal. The Primeira Liga leaders are under no obligation to trade the midfielder, who has a deal through June 2027.

Chelsea reportedly has a number of additional midfielders on their list of targets should they be unsuccessful in luring Fernandez to Stamford Bridge, including Moises Caicedo of Brighton & Hove Albion.

The Seagulls reportedly rejected the Blues’ original offer of £55 million for the 21-year-old, and the Blues have since submitted an upgraded offer of £65 million.

While their initial offer is thought to have been rejected by the Ligue 1 club, Chelsea are also said to have reached a personal agreement with Lyon right-back Malo Gusto.