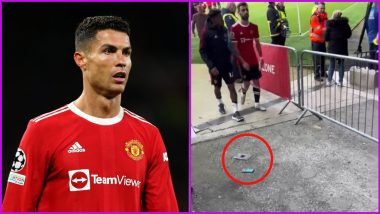 The Ex-Real Madrid forward was extremely frustrated after losing the match with the slightest of margin against the Toffees at the Goodison Park.

Ronaldo had a brilliant chance to equalize the game right at the stoppage time but he struck the ball straight to Pickford, who collected the ball calmly after it bounced away from him. Thus, Ronaldo was very frustrated while going back to the dressing room and he crushed the young kid’s phone on the path to the stadium.

A Footage, taken by @EvertonHub acts as a piece of evidence against him. While exiting the pitch CR7 crushed a young kid’s phone hitting it with his right hand.

The fan’s mother, Sarah Kelly also logged in a complaint against the United forward.

Kelly has claimed her son was left “bruised” by the incident, which left the youngster “in complete shock”.

“He’s really upset about it, and it’s completely put him off going to the game again,”

“This is the first football game he’s been to and this has happened.”

Thus, the Merseyside Police have now launched an investigation, a spokesperson confirmed.

“Inquiries are under way and officers are currently working with Everton Football Club to review CCTV footage and are carrying out extensive witness enquiries to establish if an offence has taken place.

Ronaldo had earlier apologized for the incident on Instagram and invited the fan to a match at Old Trafford.

“It’s never easy to deal with emotions in difficult moments such as the one we are facing. Nevertheless, we always have to be respectful, patient and set the example for all the youngsters who love the beautiful game.

“I would like to apologise for my outburst and, if possible, I would like to invite this supporter to watch a game at Old Trafford as a sign of fair-play and sportsmanship”

Ronaldo and Manchester United had a difficult day on the pitch as Anthony Gordon’s first-half strike secured the hosts three points.

United, who have only won once in their last 5 Premier League games, now appear unlikely to qualify for next season’s Champions League.