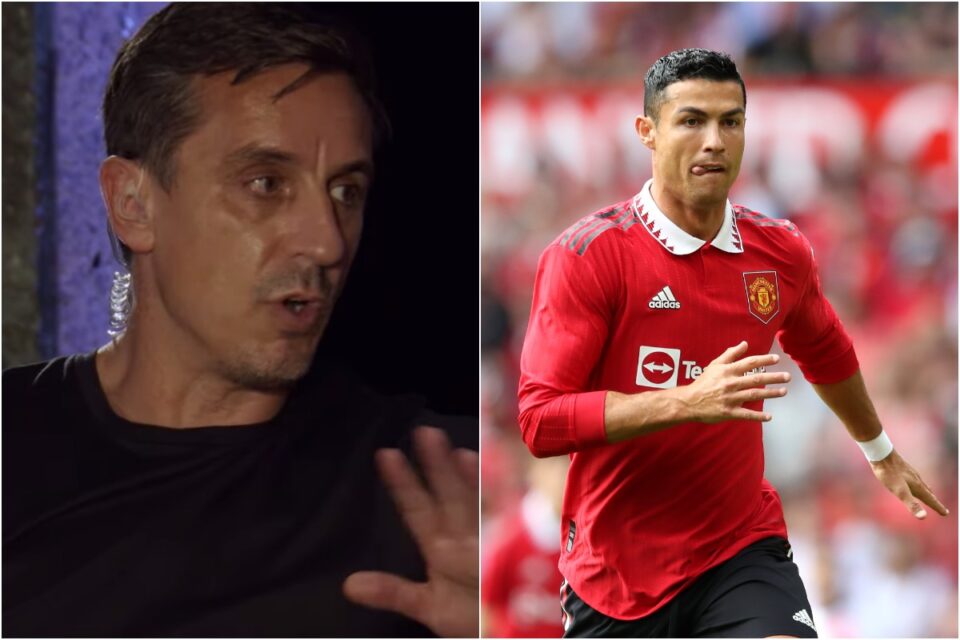 Gary Neville, a former captain of Manchester United, has urged the club to offload Cristiano Ronaldo before the summer transfer window closes.

The international player from Portugal is thought to have informed the club that he intended to depart this summer in order to continue playing in the Champions League. However, Man United has so far opposed his departure, and it looks that the 37-year-old does not have many serious suitors.

Given that Chelsea, Bayern Munich, and Paris Saint-Germain have all decided against a move, he has not left with many options.

According to rumours, Ronaldo had intended to be out of the club by the start of the new Premier League season, but he may now be included in the squad for Sunday’s game against Brighton & Hove Albion.

Neville said on The Overlap.

“It’s unpalatable for me to watch, as an ex-United captain, an ex-United senior player, thinking that the star player in the dressing room is playing up,”

“You can’t have your star player in a club running the shop. You cannot have it.

We know [Ronaldo] can’t do [high pressing] – and the way in which he wants to play on the ball, I’m not sure he fits into Ten Hag’s way.

It happened at times over the last few years where you had Paul Pogba’s agent – not necessarily Pogba all the time but his agent – always playing up with the club.”

You can’t have your star player in a club running the shop. You cannot have it. We know [Ronaldo] can’t do [high pressing] – and the way in which he wants to play on the ball, I’m not sure he fits into Ten Hag’s way.

When that statement came out that Ronaldo wants to leave and then the Monday morning I think something else came out – I’m not sure the club were even aware.”

The timing was horrific coming into the start of the season, it undermined Ten Hag straight away – it meant that Ten Hag literally has had every single press conference that he does is just obliterated by the Ronaldo issue.

I think looking back, Pep [Guardiola], [Jurgen] Klopp, [Antonio] Conte, Sir Alex Ferguson – if a player becomes the dominating factor, and a distraction in the press conference for a manager, there’s only one thing that has to happen. We all know it.”

Ronaldo to start for Man United against Brighton at the weekend?

Despite only participating in 45 minutes of preseason play, the Portuguese may now be given a chance to start against Brighton. Because Anthony Martial is expected to miss the game due to a hamstring problem.

There have also been rumours that because Ronaldo did not play much during the preseason, Red Devils manager Erik ten Hag may opt to play Anthony Elanga with Marcus Rashford and Jadon Sancho.

Neville has stated that it is crucial for the club’s success that the 20-time English champions transfer the former Sporting Lisbon teenager before the deadline.

In 37 games for the Red Devils during the 2021–22 season, Ronaldo, who had previously played for Juventus, returned to Old Trafford and scored 24 goals, including 18 in the Premier League.

But because Man United came in sixth place overall, they will compete in the Europa League this year rather than the Champions League.