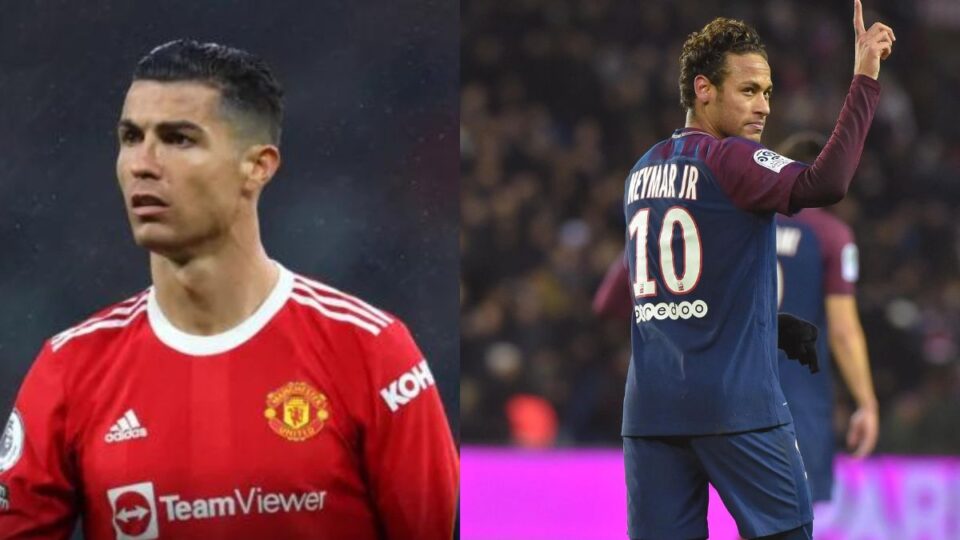 If Cristiano Ronaldo were to leave the club in the current market, Manchester United would reportedly be able to afford to sign PSG forward Neymar this summer.

Manchester United will be beginning their new Journey under their new manager Erik ten Hag. The former Ajax boss has seen 6 exits so far since taking on the guards at Old Trafford. The list of players leaving includes Paul Pogba, Jesse Lingard, Nemanja Matic, Juan Mata, Edinson Cavani, and Lee Grant. And now, it is being rumoured that the Red Devils star forward Cristiano Ronaldo might be added to that list.

Many rumours surround Ronaldo’s future at the moment, with the 37-year-old reportedly pondering staying at Old Trafford due to lack of summer signings.

The Portugal international has been linked to both Chelsea and Bayern Munich for this summer’s exit. Meanwhile, Sporting Lisbon is rumoured to be considering giving him the chance to return to his childhood club.

While the French powerhouses are reportedly eager to offload Neymar during this summer’s transfer window, raising doubts over the Brazilian star’s future at PSG. If Ronaldo were to depart Old Trafford in search of greener pastures, Man United would be in a position to recruit the Brazil international, claims RMC Sport.

According to the source, Chelsea also has the necessary funds to recruit Neymar while Ronaldo might be looking for United exit. Moreover, Newcastle United, one of the richest teams in the world as a result of their recent takeover, is a possibility as well.

Neymar has more than three years left on his contract with PSG, and the club is reportedly ready to hear bids for him this summer. However, the PSG star is reportedly unwilling to leave the French club during a World Cup year.

The South American is also now being closely connected to Juventus, and it has been reported that his representatives have been in contact with the Italian team. Barcelona are rumoured to have been approached about signing their former player.

But the Catalan powerhouses are currently focused on getting Robert Lewandowski from Bayern Munich.

While Neymar has won four Ligue 1 championships in Paris, the team has yet to claim the Champions League, and the attacker received jeers last season for some lacklustre efforts.

Since moving to Paris from Barcelona, the former Santos youth has made 144 appearances for PSG, amassing 100 goals and 60 assists.

“A possible departure of Neymar this summer? What I can tell you is that we expect all players to do a lot more than last season. A lot more! They all have to be 100%. Obviously, we weren’t good enough to go far,”

“For next season, the objective is clear: to work every day at 200%. To give everything we have for this jersey, give the maximum and we will see the result. You have to become humble again. You have to change to avoid injuries, suspensions and fouls that change a game.”

Thus, Neymar is rumoured to have been upset by the president’s remarks, which would prompt him to try to leave before the window closes.