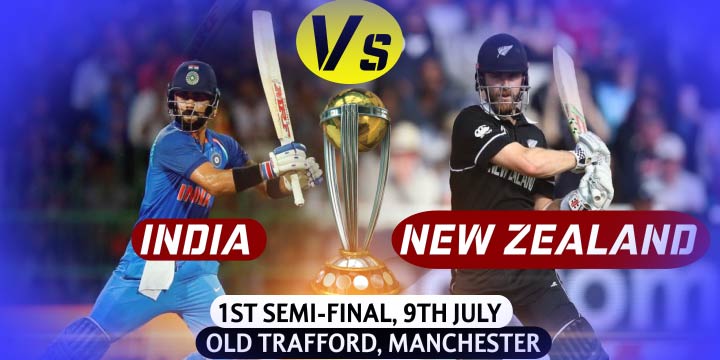 Beating Sri Lanka in their last league match, India have scaled to the top as Australia also suffered their second defeat in the World Cup against the Proteas. It is a case of ‘history repeats itself’ when India take on the Kiwis in the first semis, as both skippers, Virat Kohli and Kane Williamson were the captains of their respective U-19 sides back in the 2008 U-19 WC in the semis. India won that match by D/L method and the U-19 World Cup final as well.

Bot these skippers have moved on from then, progressing in a similar fashion and went on to become the skippers of their respective national teams. Both have evolved as master batsmen in the world, albeit Kohli sitting at the top as World’s No. 1 batsman.

A dominant India will face a slight slacking New Zealand side at Old Trafford, Manchester on July 9 in the first semi-final of the 2019 ICC World Cup. India, who have lost only one match in the World Cup would go into the semi-final with a lot of self-assurance.

Out of the seven semi-finals New Zealand appeared in World Cups, they have won just one of them. Hence, as far as stats go, India have an edge. Nevertheless, it is a big contest on Tuesday and cricket fans across the world would expect a great game of cricket.