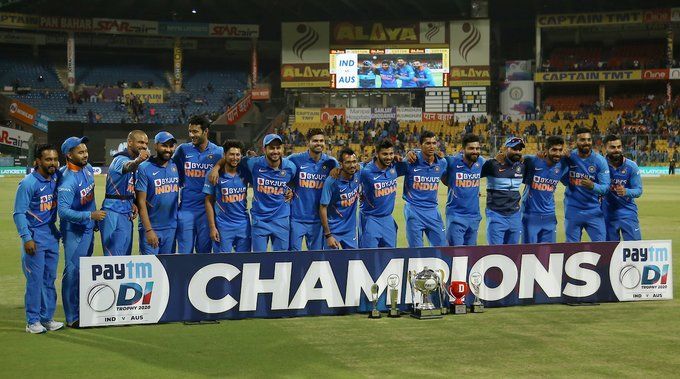 India won the last ODI by 7 wickets against Australia in Bengaluru on Sunday. With this, India won the three-match ODI series by 2-1. This is India sixth series win against Australia. Rohit Sharma scored a century in the match. Kohli played an innings of 89 runs. Kohli became the highest run-scorer in all formats as an Indian. He broke Mahendra Singh Dhoni’s record. Kohli had 11208 runs in 199 innings while Dhoni scored 11207 runs in 330 innings.

In the last ODI, Australia batted first and scored 286 runs for 9 wickets in 50 overs. Steve Smith scored 131 and Marnus Labuschagne scored 54 runs. India scored 289 for 3 wickets in 47.3 overs. Rohit Sharma scored 119, Virat Kohli 89 and Shreyas Iyer scored 44 runs not out. Rohit was adjudged Man of the Match and Kohli was named Man of the Series.

Rohit hit his career’s 29th century. He made a 137-run partnership for the second wicket with Kohli. The two formed a century partnership for the 18th time. They are third in terms of century partnership. The others are Sachin and Sourav Ganguly (26 times) and Sri Lanka’s Tillakaratne Dilshan and Kumar Sangakkara (20 times). Rohit became the third Indian to score 8 centuries against Australia. Before him Sachin Tendulkar has scored 9 and Kohli has scored 8 centuries.

Mohammed Shami bowled brilliantly in the death overs, taking 3 wickets. He took 4 wickets for 63 runs in 10 overs. Australia lost 5 wickets within 63 runs in the last 10 overs. Earlier, Australia won the toss for the third consecutive time but decided to bat this time.