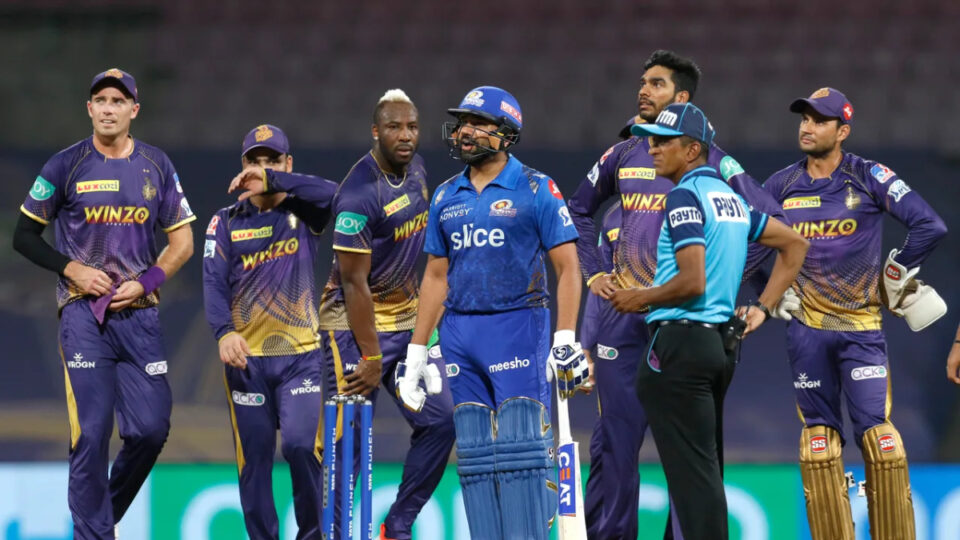 On May 9, the two-time champion Kolkata Knight Riders (KKR) defeated the five-time champion Mumbai Indians (MI) in Mumbai’s DY Patil Sports Academy (Monday) in 56th match of IPL 2022. MI managed to restrict KKR to 165/9 thanks to some brilliant bowling from senior bowler Jasprit Bumrah. However, they were unable to follow down the mark and were defeated by KKR by 52 runs.

Mumbai Indians decided to have a bowl first after winning the toss. Venkatesh Iyer and Ajinkya Rahane, the KKR openers, gave their team a good start before being scalped by Kumar Kartikeya. Following that, Indian pacer Jasprit Bumrah put on a one-man show. He conceded only ten runs in four overs while taking five key wickets to shatter the KKR backbone.

However, KKR somehow managed to pull out a decent total on the board by scoring 165 runs. MI captain Rohit Sharma is having a bad season in IPL 2022, and he was once again dismissed cheaply.

Ishan Kishan, the wicket-keeper batsman, struck a superb half-century, but no other batters managed to reach the 20-run mark. Thus, MI continued to lose wickets at regular intervals and the target looked far away from them. Pat Cummins, the Australian speed bowler, was the pick of the KKR bowlers, taking three wickets and conceding only 22 runs in his quota.

After the match the winning captain on the night, Shreyas Iyer said

“Very pleased because after losing the last game by a big margin, feels good to come back and win by a big margin is nice. We had a nice start in the powerplay and Venky targeted bowlers well.”

“The win was comprehensive, and when I spoke to the players, they were pumped up to win the game today. I’m not satisfied (totally) but want to maintain this.”

Meanwhile, the losing captain and out of form Batsman Rohit Sharma said

“I would take that total on that pitch. Was a great effort from the bowling unit, Bumrah was special. Disappointed the way we batted. Poor from the batters.”

“Batters let us down. It’s been that kind of a season where both departments weren’t consistent enough. It is something that we wanted to improve today but couldn’t do it.”

MI have now lost 9 matches this season, the most they have in any season in the previous 14 editions.

What’s next for Mumbai and Chennai?

Mi will lock horns with Chennai Super Kings (CSK) on 12th May, Thursday at Wankhede Stadium in Mumbai. While KKR will go one on one against Sunrisers Hyderabad (SRH) on 14 May, Saturday at MCA Stadium in Pune.