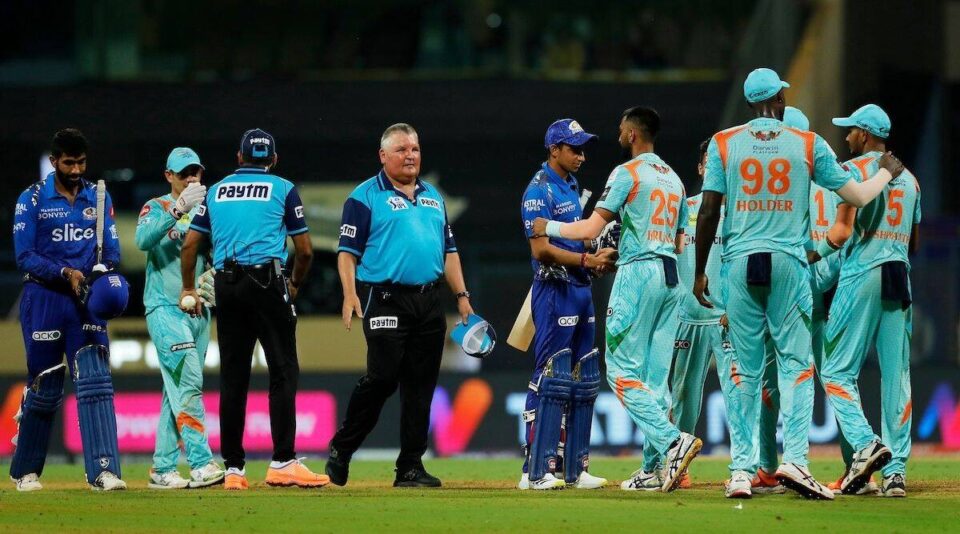 On April 24, the Lucknow Super Giants (LSG) defeated the five-time champion Mumbai Indians (MI) at the legendary Wankhede Stadium in Mumbai (Sunday). LSG outperformed MI in every category, and the Men in Blue and Gold have now dropped eight consecutive games.

Rohit Sharma, the captain of Mumbai Indians, won the toss and chose to bat first. Quinton de Kock, a former MI batter, went early with only 10 runs on his record, proving his selection was correct. Manish Pandey and skipper KL Rahul put on a 58-run second-wicket stand before the latter was removed after scoring 22 off 22 balls.

The Super Giants, on the other hand, were quickly in danger after losing all-rounders Marcus Stoinis and Krunal Pandya in quick succession.

Despite a stunning fall, Rahul maintained his composure and kept the scoreboard ticking along at a steady pace. In just 61 balls, the LSG captain achieved the three-figure mark. LSG concluded with a competitive total of 168/6 from their 20 overs thanks to his superb innings of 103 runs off 62 balls, which included 12 fours and four maximums.

Ishan Kishan, the wicketkeeper-batter, could not get going in response (8 off 20 balls). Before being scalped by Krunal Pandya, skipper Rohit played a solid 39-run inning. Dewald Brevis (3 off 5 balls) and Suryakumar Yadav (7 off 7 balls), two in-form batsmen, both failed.

Tilak Varma, a young batter, and Kieron Pollard, a West Indies power hitter, gave it their all for the five-time champions, but it was too much to ask of the two batters who faced some disciplined bowling from the LSG side.

After losing Yesterday’s encounter, MI’s chances to qualify are over and they continue their losing streak to 8. In the post-match interview, skipper Rohit Sharma said

“I thought we bowled pretty okay. It wasn’t easy. It was a good pitch to bat on. I thought that score should have been chased down, but we didn’t bat well enough.”

“But when you lose games, you always have such discussions. As far as I am concerned, I want to give people enough chances to prove themselves. The season hasn’t gone the way we would have wanted it to, but such things happen.”

Meanwhile, LSG now find themselves at the fourth spot alongside GT, SRH, & RR in the top 4 of the league standings. LSG skipper Rahul was adjudged player of the match for his excellent batting performance. Winning captain KL Rahul said

“Trying to play according to the situation, see what’s expected out of me. Enjoying batting, enjoying the responsibility. Fingers crossed I can keep doing the right things.”

“Teams that can defend well, or bowl well in the powerplay and finish off well in the death overs are teams that have won the tournament.”

What’s Next for Lucknow and Mumbai?

LSG will lock horns with Punjab Kings (PBKS on Friday, April 29 at MCA Stadium, Pune. While we will have to see how long the losing streak continues for MI as they now get ready to face Rajasthan Royals at DY Patil Stadium, Navi Mumbai.