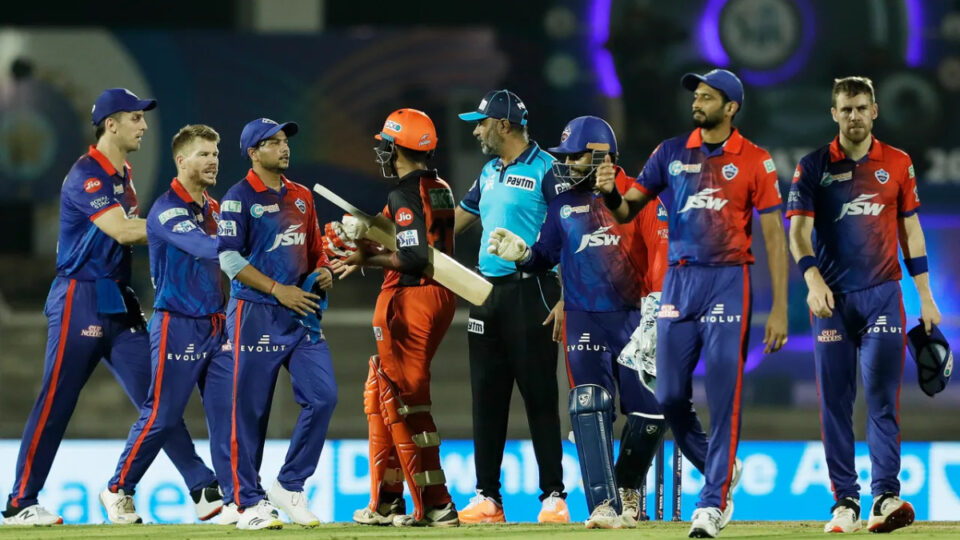 On May 5, the Delhi Capitals (DC) defeated the Sunrisers Hyderabad (SRH) by 21 runs at the Brabourne Stadium in Mumbai in IPL 2022 Match 50. SRH suffered their third consecutive defeat, but DC added two valuable points to their account to restart their season.

Opener Mandeep Singh was removed for a duck in the first over, and Australian all-rounder Mitchell Marsh returned to the bench with only 10 runs.

However, it was then that David Warner and skipper Rishabh Pant came to the rescue with a 48-run third-wicket stand. Following Pant’s departure, Warner and Rovman Powell kept the scoreboard ticking and then accelerated in the death overs to ensure no additional setbacks.

The pair put on an unbroken 122 runs for the fourth wicket to take the score to 207/3. Powell scored 67 runs off 35 deliveries, keeping his unbeaten record at 58 balls.

In response, Abhishek Sharma and skipper Williamson were removed for single-digit scores, giving the Orange Army an early setback. Even Rahul Tripathi failed to impress and was dismissed for 22 runs.

The seasoned pair of Aiden Markram and Nicholas Pooran contributed 60 runs for the fourth wicket before the former was dismissed for a 25-ball 42. Pooran then tried his hardest to keep SRH in contention by taking on Delhi’s bowling attack on his own despite running out of partners.

SRH, however, were restricted to 186/8 after he was dismissed for a quickfire 62 runs from 34 balls.

With this DC moved to 5th spot in the league standings with 10 points in 10 matches. While SRH sits at 6th spot having a similar display as DC with only Net Run Rate separating both the teams.

After the match the winning captain Rishab Pant said

“There is always room for improvement, but it’s close to a perfect game for us as a batting unit. I was calm about myself. In high chases, the other team needs 10-12 runs per over, it’s difficult to hit till the 20th over.”

“We are just taking one game at a time and trying to give our 100%. I got out to a full-toss, that’s part and parcel of the game. Good and important win for us.”

“As a batting unit we had a lot of belief. You know for us it is just going back to the drawing board. Outstanding knock from David Warner and later by Powell.”

“Things can change quickly if we put things together. They have had rhythm batting in the middle order. Those two (Pooran and Markam) have been good. Just trying to play a role for the team. Staying patient. Every team is strong. Trying to contribute to the team’s cause.”

What’s next for Delhi and Hyderabad?

DC will play defending champions Chennai Super Kings in their next game on Sunday at Dy Patil Stadium in Mumbai.

While SRH will lock horns with the Royals from Bangalore in the noon time on the same day at Wankhede Stadium in Mumbai.