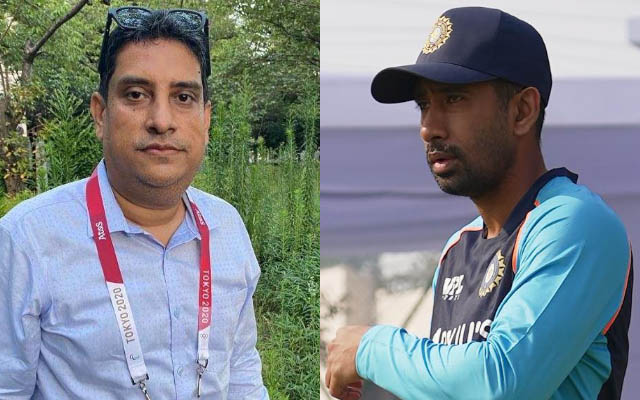 Boria Majumdar, a journalist, was found guilty of “threat and intimidation” against Wriddhiman Saha by the BCCI’s three-member tribunal. As a result, Majumdar, who was mentioned by Saha during the hearing, has been banned for two years by the BCCI’s Apex Committee.

The punishments against Majumdar were announced by BCCI Interim CEO Hemang Amin in an email to the State Associations.

The journalist will be denied press credentials, interviews with “registered” players, and access to any BCCI or state cricket events as a result of the penalty.

After the members spoke to Saha and Majumdar, it was concluded that Majumdar’s actions “were indeed in the nature of threat and intimidation”.

Conversation between Saha and Boria Majumdar

In February, Saha, who had been dropped from India’s Test team published a screenshot of messages that a journalist had sent him on WhatsApp.

The screenshot showed the sender requesting Saha “to do an interview with me” to which Saha did not respond. The messages eventually took a more aggressive tone thereafter, the journalist said

“You did not call. Never again will I interview you. I don’t take insults kindly. And I will remember this. This wasn’t something ypu [sic] should have done.”

In a video posted to social media, Majumdar said that the screenshot Saha posted was a doctored version of an exchange between the two.

Thus, BCCI decided to create a committee “to investigate and probe the matter to avoid the recurrence of such instances with other players”

Currently, Saha is playing for Gujarat Titans (GT), who are leading the points table in the 15th edition of IPL. Saha has scored 154 runs so far in 5 innings at an average of 30.08 and he looks in decent form.