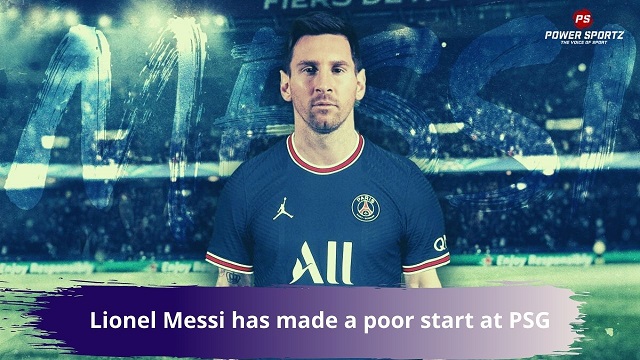 The Argentinean superstar has struggled to provide any assists or goals in the first three
games he has played in Ligue 1 after being sidelined due to fitness issues. This has been
extremely shocking to the entire world of football as everyone expected the magician to
provide more to his side in the matches he has played.

Despite Messi having such a bad run at games PSG are still dominating the league and are
currently coming first by winning eight out of the nine matches they have played in which
Kylian Mbappe has been the center of attention as he has been able to provide four goals
and three assists in the nine matches, he has played this season.

Lionel Messi is struggling to make an impact at PSG this season.

There has been a falling out between Mbappe and PSG and as the club didn’t allow the
transfer of their young superstar to his dream club Real Madrid in the summer transfer
window. Many experts expect Kylian to stop giving his all for the club after the international
break ends on the 16’th of October which could potentially strain the goals and assists being
provided to this club and tamper their success. This is bound to put more pressure on
players such as Di Maria and Neymar to perform who have been out of form this season due
to fitness issues.

Lionel Messi will need to need to provide a steady stream of goals and assist for his side in
order to regain the title in France after loosing out to Lille in the 2020-2021 season by one
point. In addition to winning the Ligue 1 the club is expected to win the Champions league
as they have added many world-class players such as Sergio Ramos, Donnarumma, Achraf
Hakimi and Wijnaldum to their side this season.