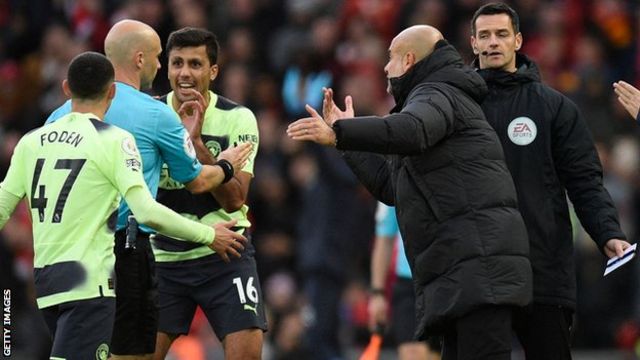 Liverpool defeated Manchester City 1-0 in a tense match at Anfield to snap their 21-game unbeaten streak in the Premier League. Mohamed Salah scored the game’s lone goal at Anfield to give the Reds a well-deserved victory.

A few minutes after kickoff, Arsenal defeated Leeds United 1-0, therefore, Man City wanted to maintain their one-point lead over the Gunners while Liverpool wanted to win to go up as high as seventh.

Salah ultimately defeated Ederson in the 76th minute, ending the match between the two enduring contenders for the championship. Erling Braut Haaland, the talisman of the defending champions, was rendered ineffective, and City was sent home empty-handed.

After the Reds had made a good start to the game, City midfielder Ilkay Gundogan unleashed a half-volley with 15 minutes remaining, but Alisson Becker was up to the challenge with a simple low save. It was not surprising to see Haaland given a few chances to break the score in the first half after Liverpool’s Andy Robertson also flew over the crossbar from a great position.

Just before halftime, the Norwegian attempted to score with a header that was comfortably saved by Alisson. The Anfield audience was happy with what they had seen through the opening 45 minutes.

Five minutes after the break, Liverpool launched a counterattack, with Roberto Firmino setting up Salah one-on-one against Ederson. However, the Man City goalkeeper made a spectacular save to deflect Salah’s strike just wide of the post.

Just a few seconds later, Phil Foden ghosted in to score after Joe Gomez’s deflection allowed him to finish, but VAR saved Liverpool by disallowing the goal.

Alisson, the goalkeeper for Liverpool, appeared to have two hands on the ball when Haaland snuck in, but the goal was ultimately disallowed because the Norwegian pulled Fabinho’s shirt during the build-up.

Before Diogo Jota’s shot missed the post, Pep Guardiola cut an angry figure on the sidelines. Meanwhile, Alisson continued to prevail in his duel with Haaland by getting low to his right to maintain the scoreless.

The Liverpool manager subsequently made a wave of substitutes; however, there was confusion when Salah’s number was called, and the Kop were delighted that the 30-year-old was not substituted soon after.

After collecting the ball inside the penalty area, Alisson released a precise long pass to Salah, who then twisted Joao Cancelo and calmly curled the ball into the net this time against Ederson to send Anfield into a frenzy.

Then, as Liverpool upped the tempo, the recently introduced Darwin Nunez blasted a shot just wide. However, Klopp became enraged when an apparent foul on Salah that occurred just in front of the assistant referee was not called.

When Liverpool found themselves three on one in the Man City half, Nunez selfishly tried to go himself, and the attack collapsed. The Reds manager was given his marching orders before Salah and Bernardo Silva engaged in handbags.

In the third of the six additional minutes of the second half, substitute Trent Alexander-Arnold attempted a tough goal but failed to connect properly with Nunez’s pass across the box.

When Jota was carried off on a stretcher towards the 100-minute mark, the atmosphere was considerably dampened, but Anfield exploded in joy when Anthony Taylor blew the final whistle.

After 10 games and a loss, Man City is now four points behind leaders Arsenal in second place, while Liverpool has moved up to ninth and is now six points off the top four.