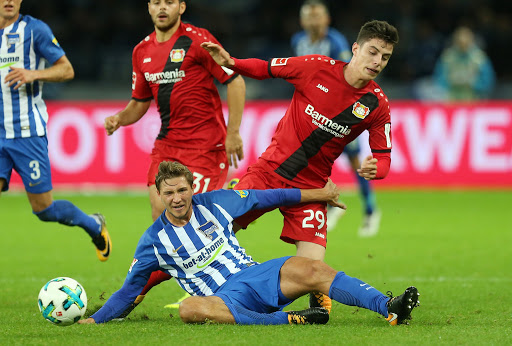 Hertha Berlin salvaged from oblivion and rose from the bottom three in Bundesliga by handing a 3-0 defeat and stun Bayer Leverkusen. Hertha Berlin struck in the first half of the match with three goals from Deyovaisio Zeefuik, Matheus Cunha, and Jhon Cordoba.

Hertha played brilliantly at home as Dodi Lukebakio picked a loose ball following a parry from Leverkusen goalkeeper Lennart Grill before setting up for Zeefuik, who fired the ball into the top left corner within just four minutes of the match on Sunday.

Leverkusen also tried to respond with some frenetic attacks and managed some dominating possession and Patrik Schick’s header on target with 11 minutes gone, there wasn’t a lot to do for Hertha’s defense.

However, Hertha defended quite well, thwarting the visitors at bay and fully focused on counterattacks. The hosts took the goals to a double in the 26th minute as Leverkusen’s Charles Aranguiz was dispossessed in midfield before Lukebakio squared to Cunha, who beat Grill with a well-placed low shot into the bottom corner.

For the visitors matters only worsened moments later, as Cordoba played through Leverkusen’s defence before overcoming Grill with a turn shot to make it three in the 33rd minute.

After the game resumed, the hosts were back to their original ways as Grill had his hands full after Cordoba and Cunha came close in quick succession in the 50th minute.

Pal Dardai’s men almost extended the lead to 4-0 but Lukebakio’s goal was disqualified due to a handball by Cordoba.

Leverkusen failed to attack but tested custodian Rune Jarstein through Schick in the 55th minute, while Grill was very busy denying Cunha and Lukebakio in the closing stages.

After the win, Hertha Berlin took off from a relegation spot and into 14th position, while Leverkusen remained in sixth place despite losing its second straight game.