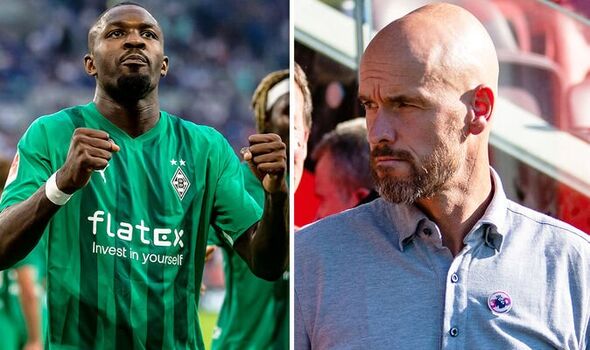 Marcus Thuram of Borussia Monchengladbach is allegedly a target for Manchester United during the January transfer window. The 25-year-old has put up a spectacular 2022–23 season for his German club, tallying 10 goals and three assists in 15 Bundesliga appearances, as well as three goals and one assist in two DFB–Pokal outings.

However, Thuram’s deal with Gladbach is set to expire at the end of June, and it doesn’t seem likely that he will sign a new deal with the Bundesliga team. Inter Milan, Bayern Munich, and Juventus are all interested in the forward, and Gladbach is willing to trade him at the appropriate price in the beginning of 2023, according to Italian journalist Rudy Galetti.

Man United are reportedly also interested in the Frenchman, who could be had in January for as little as £10 million (£8.7 million). Thuram began his professional career with Sochaux before transferring to Guimcamp in 2017.

He is presently a member of the France team competing at the 2022 World Cup. Prior to joining Gladbach, the forward played for Les Guingampais for two years. He has since played 119 times for the Bundesliga club, making 41 goals and 26 assists.

Despite missing a lot of games in 2021–22 due to injury, the Frenchman only scored three goals in 23 appearances last season across all competitions. Thuram has improved this season, and when the winter window opens for business, he might be planning to leave Die Fohlen.

Man United reportedly had no intention of adding a new striker during the January transfer window after exceeding their summer spending budget.

The 37-year-old Cristiano Ronaldo is officially a free agent after being released from his Old Trafford contract.

The result is that the Red Devils are now lacking a center-forward due to Anthony Martial’s ongoing injury issues for the 2022–23 season.

Additionally, Man United has reportedly expressed interest in Memphis Depay, a former player who is anticipated to leave Barcelona at the beginning of 2023.

Cody Gakpo of PSV Eindhoven is still being connected to the team, but a transfer for the Dutchman is unlikely to happen until the season is over.