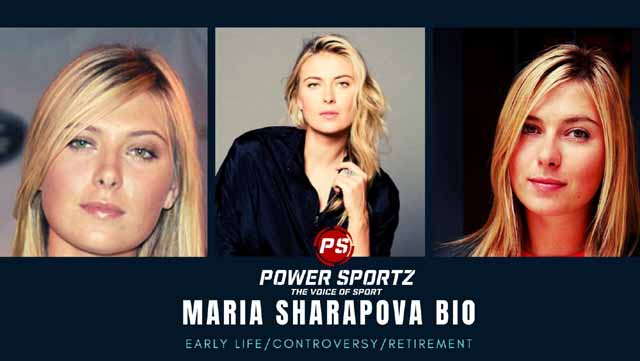 Maria was born on April 19, 1987, in Nyagan, Siberia, Russia. After learning to play tennis as a young child, at the tender age of 9, she moved to Florida with her father, earning a scholarship to train at the Nick Bollettieri Tennis Academy

Long-limbed, filled with Power, Sharapova could not help being recognized on the competitive circuit. By her 14th birthday, she turned pro but continued to compete among her peers, finishing runner-up at the junior Wimbledon and French Open tournaments in 2002.

In the year 2003, Sharapova claimed her first WTA victory at the Japan Open and also reached the fourth round at Wimbledon on her first attempt in the same year. In 2004, she won the singles title at Wimbledon, becoming Russia’s first female Wimbledon champion. At the end of 2004, she added a WTA Championships title to her list of achievements.

In the year 2005, Sharapova became the first Russian woman to ascend to the sport’s top ranking and in 2006,  she claimed her second Grand Slam title with a win at the U.S. Open.

The injury was something that accompanied the long-limbed athlete. Maria was forced to go slow on account of shoulder problems for much of 2007 and 2008, although she managed to win her third Grand Slam with fiery prowess at the 2008 Australian Open. She finally underwent shoulder surgery in October of 2008, and the resulting layoff forced her out of the Top 100 until her return to singles action in May 2009.

After her surgery, Sharapova struggled to regain her consistency against the premier women’s players, but she was back in the Top 20 by the end of 2009 and finished 2011 ranked No. 4 in the world. In June 2012, Sharapova made a mark by defeating Sara Errani in the French Open final. The victory was a big one for her then and made her just the 10th woman to complete a career Grand Slam (wins at all four major tournaments) and allowed her to regain the world’s No. 1 ranking.

In March 2016, Sharapova shocked the Tennis World when she announced that she had failed a dope test at the Australian Open in January. At a press conference, which was suddenly called for, the tennis star said that she had tested positive for Mildronate, with an active ingredient of meldonium, which she had been taking for her pain issues since 2006. The drug was added to the World Anti-Doping Agency’s (WADA) prohibited list on January 1, 2016.

“It’s very important for you to understand that for 10 years this medicine was not on WADA’s banned list and I had been legally taking the medicine for the past 10 years,” Sharapova categorically stated at the press conference. “But on January 1 the rules had changed and meldonium became a prohibited substance, which I had not known, she added.

After her suspension period, Sharapova returned to action at the Porsche Tennis Grand Prix in, 2017. She won her first WTA title in two years at the Tianjin Open in October and battled her way back into the sport’s Top 30 in 2018, her performance in the French Open quarterfinal among the year’s highlights.

As health issues continued, the erstwhile champion struggled to remain competitive after advancing to the fourth round of the 2019 Australian Open. On February 26, 2020, one month after her first-round loss at the Australian Open, Sharapova finally announced her retirement

“Looking back now, I realize that tennis has been my mountain,” she wrote. “My path has been filled with valleys and detours, but the views from its peak were incredible. After 28 years and five Grand Slam titles, though, I’m ready to scale another mountain — to compete on a different type of terrain.”