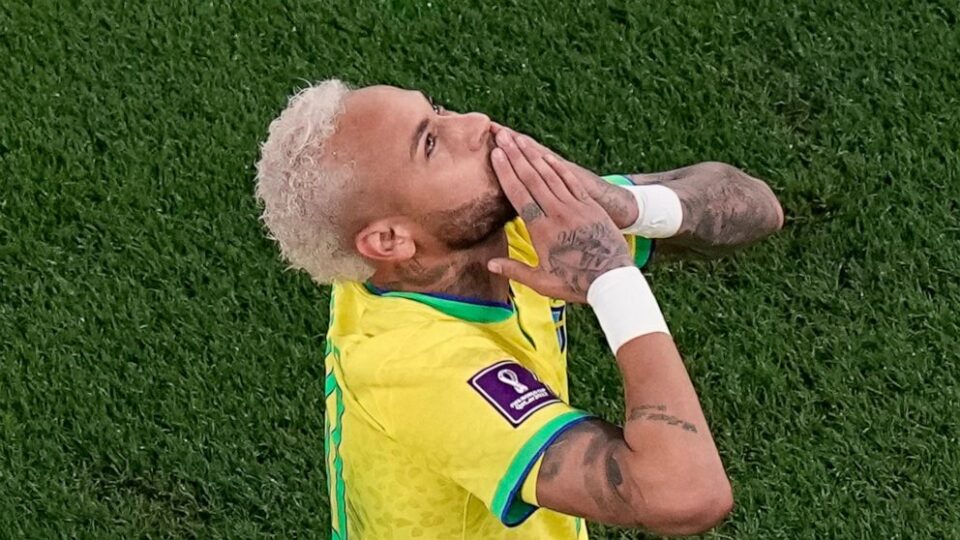 After scoring in Brazil’s 4-1 victory against South Korea in the World Cup‘s round of 16, Neymar has entered an elite club that includes Pele and Ronaldo.

Following two games missed due to an ankle injury, the 30-year-old was reinstated to the starting lineup as head coach Tite went back to his strongest lineup after making numerous substitutions in the 1-0 group-stage loss to Cameroon last Friday.

Vinicius Junior scored the game’s first goal in just the seventh minute with a cool, clinical finish. Six minutes later, after Richarlison was brought down inside the penalty area Neymar converted a penalty kick to score his first goal of the tournament in Qatar

Before the half-hour mark, Richarlison assisted in Brazil’s third goal of the game, which was brilliantly finished by the team from close range. Then, in the 36th minute, Lucas Paqueta volleyed in Brazil’s fourth goal.

In the closing 15 minutes, South Korea managed to score a consolation goal on a beautifully executed volley by replacement Paik Seung-ho, but Brazil eventually held on to advance to the quarterfinals.

With 76 goals in 123 appearances for Brazil in international competitions, Neymar is currently just one goal behind Pele, the Selecao’s all-time leading scorer with 77 goals.

Along with legends Pele and Ronaldo, the Paris Saint-Germain forward is now just the third Brazilian to score in three different World Cup competitions.

In his 12 World Cup appearances, Neymar has scored seven goals, including four in 2014, two in 2018, and his goal against South Korea this year.

After suffering an ankle injury in Brazil’s opening group match against Serbia, Neymar said that he was “weeping a lot” and that he was “scared” about missing the remainder of the World Cup.

The PSG forward had a history of problems, missing the 2014 World Cup semifinals due to a back issue and not being totally healthy to play for Brazil in the 2018 World Cup owing to a foot injury.

But Neymar is happy to be well enough to play in the knockout stages and thinks Brazil has a good chance to advance all the way and win a record-extending sixth World Cup this year.

“I was very scared because I was doing very well, after a very good season (with PSG). Suffering an injury like I did is very hard,”

Neymar told Globo after the game.

“I spent the night of the other day crying a lot. My family knows, but it all worked out. It was worth the effort.”

“Surely the time has come [for Brazil] to go further. We dream of the title, but we have to go step by step. It was the fourth game today, three to go. We are very prepared, with our heads focused on getting this title.”

Neymar wasn’t the only Selecao player to make history at Stadium 974; center-back Thiago Silva has now tied Cafu and Dunga for the most World Cup appearances as captain with 11.

The Chelsea defender, who is 38 years and 74 days old, set up Richarlison for Brazil’s third goal to become the oldest player to assist on the largest international stage since Cameroon legend Roger Milla (42 years and 39 days).

The South American powerhouses will now get ready for their quarterfinal matchup against Croatia on Friday. Croatia advanced from the last 16 by defeating Japan 3-1 on penalties.