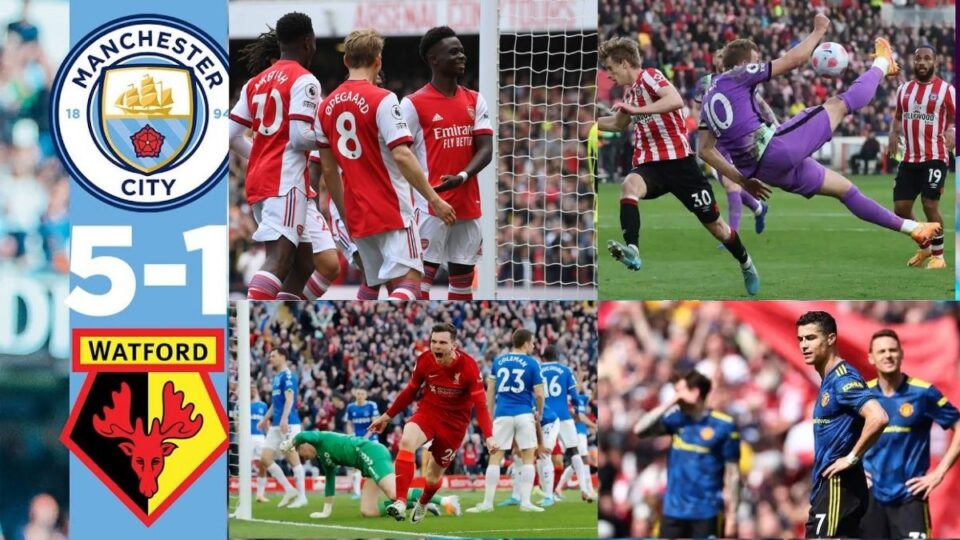 The Matchday 34 of the Premier League saw an exciting twist in the Top 4 race while the title chase remained stable.

Meanwhile, Crystal Palace are yet to play against Leeds United, who will travel to Selhurst Park on Monday.

Arsenal defeated Man United by 3-1 with Tavares, Saka & Xhaka scoring for the Gunners and Ronaldo getting a consolation.

Leicester indulged in a goalless draw against Aston Villa with both sides creating chances but unable to find the back of the post.

Man City continued their co-dominance in England alongside Liverpool, the Sky Blues defeated Watford by 5-1. Gabriel Jesus struck two braces and Rodri scored one to extend the gap at the top f the table to 4 points.

Newcastle continued their good-run as they defeated Norwich with Joelinton’s brace Bruno’s one to make the scoreline 3-0.

Brentford and Tottenham see out each other in a goalless draw with Christian Eriksen reuniting with his Spurs teammates. Harry Kane almost scored from a spectacular bicycle-kick at the stoppage time but it now gave Arsenal the lead in the Top 4 chase.

Burnley defeated Wolves with Matej Vydra resgistering himself on the scoresheet as the match ended 1-0.

Chelsea’s Christian Pulisic struck a late winner to beat West Ham (1-0), who were down to 10-man for last 5 minutes of the game.

Brighton and Southampton were involved in a 4-goal thrilling contest as match ended in a 2-2 draw. Danny Welback opener and Salisu’s own goal gave brighton a 2-goal lead which was cancelled out by Ward-Prowse brace.

Liverpool defeated their neighbours Everton (2-0), who visited Anfield with some ugly tactics of time wasting. Robertson scored the opener while Origi sealed the deal for the Reds to decrease the gap to 1 point at the top of the table.

The top of the table remained to be stable as both Mnchester City and Liverpool won their respective fixtures to maintain the 1-point gap. While Manchester United were kicked out of the Top 4 chase and Tottenhap slipped to give Arsenal a 2-point advantage.