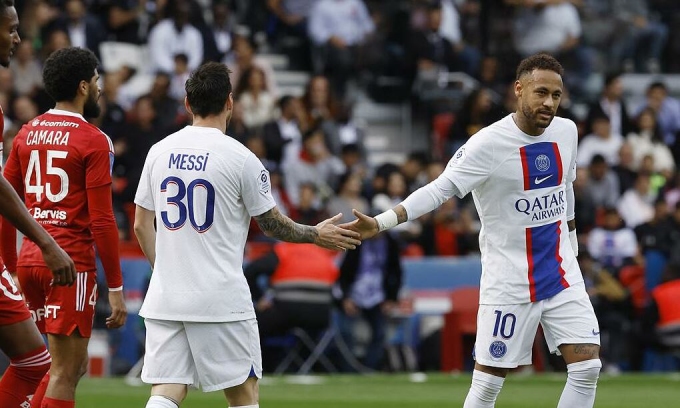 In Sunday’s 1-0 win over Brest for Paris Saint-Germain, Lionel Messi shattered his own record for assists. The Argentinean assisted Neymar in scoring the game’s lone goal against Brest.

Paris Saint-Germain defeated Brest 1-0 at the Parc des Princes on Saturday to maintain their perfect record and recover first place. Neymar scored the game’s only goal, his eighth of the season in Ligue 1.

In order to give PSG their third straight league victory and tie Marseille for first place in Ligue 1 in terms of points.

Messi may only three league goals this year compared to Neymar’s eight and Kylian Mbappe’s seven, but the former Barcelona player leads his teammates in Ligue 1 assists with seven this year.

In fact, Messi has now given 17 assists in 2022, breaking his previous record and outpacing every other player in the top five European Leagues. In 2011, 2018, and 2020, the Argentine international racked up 16 league assists, but this year is the first time he has managed to reach 17.

Messi is anticipated to play in Wednesday’s away Champions League match against Maccabi Haifa as PSG looks to capitalise on their 2-1 victory over Juventus last week.

Despite a strong opening, Brest was ripped apart in the 30th minute when Neymar scored from a tight angle after being set up by Lionel Messi. Brest had previously given up a club record 16 goals in their first six games.

The visitors were fortunate that they were not reduced to 10 men early. Neymar was scythed down by Christophe Herelle, but the referee later overturned the call because the PSG star was offside prior to the tackle, according to a review.

The hosts turned the tables on their opponents, and Messi and Kylian Mbappe both missed great opportunities either side of halftime before 17th-placed Brest was given a penalty kick. However, Donnarumma stopped Slimani’s feeble attempt in the 70th minute.

“It was very difficult. It was important to win after the Champions League and we did that,”

“We’re also happy for our fans who are always there for us and we wanted to win for them. It’s really important to be able to suffer together and we saw that today.”

After exhausting their replacements, PSG was down to 10 men when Presnel Kimpembe, whose challenge on Noah Fadiga resulted in the penalty, went down hurt. However, veteran defenders Sergio Ramos and Marquinhos helped PSG finish the game.

With a diving stop when the ball appeared to be going in at the near post off Slimani’s shoulder following a whipped cross from the left, Donnarumma played a key role in ensuring the home team won.

The victory extended PSG’s winning streak against Brest to 12 games, but it was far from easy. Before their Champions League match on Wednesday at Maccabi Haifa and their trip to Olympique Lyonnais the following Sunday, they will try to resolve offensive problems.