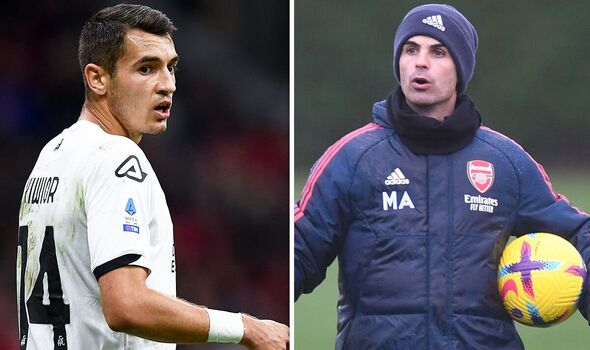 Polish centre-back Jakub Kiwior has been officially signed by Arsenal from Spezia. The 22-year-old player signs a long-term deal with the Premier League’s top team.

The deal is reportedly for four and a half years until 2027 with an option for an extra 12 months. After Leandro Trossard, Kiwior is Arsenal’s second acquisition of the January transfer window, and the Gunners reportedly paid an upfront sum of £17.5 million, which may increase to £21 million with add-ons.

The Polish international, who can also play as a defensive midfielder and wing-back, comes to North London to challenge and cover Gabriel Magalhaes in the centre of the defence.

“It’s great that Jakub is joining us. He’s a young versatile defender who has shown huge potential and qualities with Spezia in Serie A, and also at international level with Poland,”

“Jakub is a player who will give us strength and quality to our defensive unit. We welcome Jakub and his family to Arsenal and look forward to working with him.”

Kiwior was thought to have been on the radar of Napoli, Juventus, and AC Milan among other teams. However, Arsenal moved rapidly to secure a contract for Kiwior, and they made progress in their talks on Friday.

The former Anderlecht player later travelled to North London over the weekend. Moreover, he was spotted there on Sunday during Arsenal’s 3-2 Premier League victory against Manchester United.

“We’re delighted to have completed the signing of Jakub Kiwior. He’s a young talent who we’ve been monitoring for a while now.”

“We are now all looking forward to working with Jakub and seeing his continued development with us. We welcome Jakub to Arsenal.”

When can Jakub Kiwior make his Arsenal debut?

After 43 appearances across all competitions for the Italian team, Kiwior departs Spezia. From a midfield position last season, Kiwior assisted the Little Eagles in avoiding relegation to Serie B.

Prior to the acceleration of discussions with Arsenal, Kiwior started the first 17 Serie A games of Spezia in his new position as a center-back for the 2022–23 season. He has nine caps for the senior Poland side.

The defender only made his Poland debut in June, but he started each of his team’s four games at the 2022 World Cup as the Eagles were eliminated by eventual runners-up France.

Prior to Arteta’s team’s return to Premier League action on February 4 at home against managerless Everton, Kiwior might make his debut for the Gunners in Friday’s FA Cup fourth-round matchup against Manchester City.