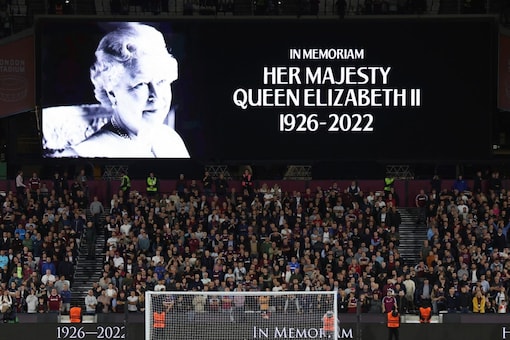 Liverpool FC’s journey to Stamford Bridge to take on Chelsea and Manchester United‘s home match against Leeds United have both been postponed,

Due to resource constraints brought on by The Queen’s burial, which will be held on Monday, both matches that were scheduled to take place on Sunday afternoon have been cancelled.

Even though it was originally postponed due to anticipated industrial action that has since been cancelled in light of The Queen’s passing. Meanwhile, Brighton & Hove Albion vs. Crystal Palace will still go place as scheduled.

The remaining seven games will go on as planned because they are not considered high category fixtures, including the London matches between Tottenham Hotspur and Leicester City and Brentford and Arsenal. Football at all levels was cancelled in England over the weekend due to the passing of Queen Elizabeth II, and Arsenal’s Europa League match against PSV Eindhoven on Thursday has also been cancelled.

This week, hundreds of thousands of people—including many international leaders, are anticipated to travel to London to pay their respects to The Queen, whose remains will lay in state there for four days prior to her funeral on Monday.

Due to coverage of the funeral, Sky TV trucks are in short supply, which has put a strain on police resources. This has been mentioned as another potential reason for postponements.

However, because the international break will follow this weekend’s domestic action, Manchester United, Chelsea, and Liverpool will now play their last games in September rather than this week.

Leeds, on the other hand, will have almost a month between games after their 5-2 loss to Brentford on September 3 and their upcoming match against Aston Villa on October 2.

Two of the seven games that are still scheduled for this weekend have had their kickoff times altered.

Statement from the Premier League for calling of Liverpool, United and Chelsea games

“Premier League fixtures will resume this weekend after a pause to the season as a mark of respect following the passing of Her Majesty Queen Elizabeth II,”

read a statement from the Premier League.

“Seven of the 10 Premier League fixtures this weekend will be played, with three matches postponed due to events surrounding The Queen’s funeral. In addition, kickoff times will change for two Premier League matches.

“Matches postponed on Sunday 18 September are Chelsea’s matches against Liverpool at Stamford Bridge, and Manchester United’s home match vs. Leeds United. Brighton & Hove Albion’s fixture against Crystal Palace, that was due to be played at 15:00 BST on Saturday 17 September, will also remain postponed.”

The Premier League has also stated that there will be tributes to The Queen during this weekend’s games.

“Following extensive consultation with clubs, police, local Safety Advisory Groups and other relevant authorities, there was no other option but to postpone the three fixtures,”

“The Premier League would like to thank the UK Football Policing Unit and other police forces across the country, as well as our broadcast partners, for their support during this process, and will continue to liaise with them ahead of the weekend.

“For the matches being played during the period of National Mourning, tributes will be paid to The Queen at Premier League stadiums. New dates for the postponed matches will be announced in due course.”

Due to the World Cup being held in Qatar this winter, there won’t be any openings to play the rearranged games until at least January, which will result in additional fixture congestion later in the season.