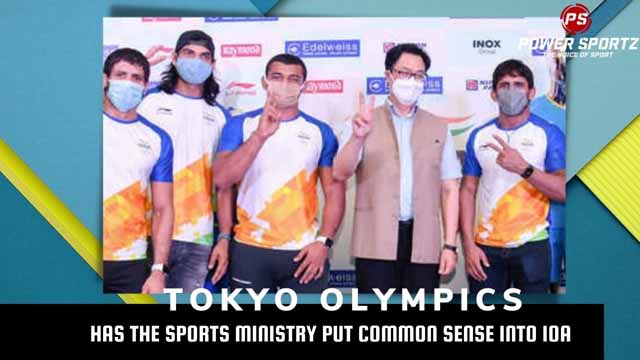 As of last Thursday, the Indian Olympic Officials were excited about the unveiling of India’s sporting and ceremonial kits, in the presence of sports minister Kiren Rijiju, Chinese brand Li Ning was announced as the official sports apparel sponsor

Suddenly in a turnaround of events, taking umbrage under the emotion of  ‘respecting the sentiments of the people of the country, the Indian Olympic Association (IOA) said they have withdrawn from their ‘existing contract with an apparel sponsor’ and that the Indian contingent will be wearing ‘unbranded apparel’ during the Games next month.

As if feigning ignorance, less than a week later from the unveiling ceremony,  IOA president Narinder Batra and secretary-general Rajeev Mehta did not specify the name of the apparel sponsor. “We are aware of the emotions of our fans and we in the IOA have decided that we will withdraw from our existing contract with an apparel sponsor. Our athletes, coaches, and support staff will wear unbranded apparel,” the statement said.

When asked specifically if the apparel sponsor referred to in the statement was Li Ning, Batra and Mehta were tight-lipped or rather tongue-tied!

Apparently, the logic behind the sudden decision was so the athletes could focus on training instead of ‘answering questions about the apparel brand.

“We are thankful for guidance by the Ministry of Youth Affairs and Sports in making this decision. We would like our athletes to be able to train and compete without having to answer questions about the apparel brand. As it is, they have all been challenged by the pandemic over the past year and a quarter and we want them to be not distracted,” the statement said

“Our association (with Li Ning) is till the Tokyo Olympics but we will take up the issue in our general body meeting. For us, the country comes first,” Mehta had said last June. The organisation, however, continued their partnership with the company leaving some a little confused about who exactly the Indian Olympic Association was supporting.

On June 3, after unveiling the kit, the IOA said in a media release: “Li-Ning designed the official sports kit inspired by India’s national colours and integrated unique graphics to emote the energy and pride of the Indian Olympic Team.”

The Indian Olympic Association have also been very vocal about India coming back with a double-digit medal tally this time at the Tokyo Olympics.