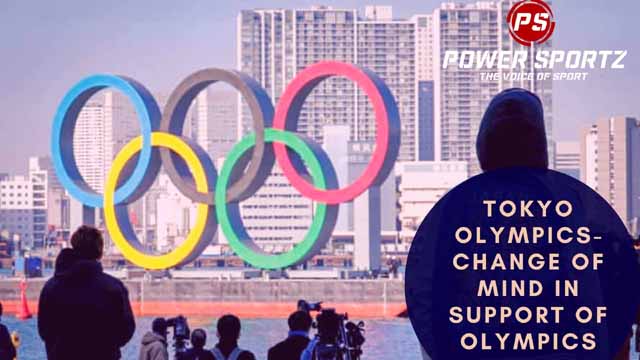 After sentiments completely against the holding of the Tokyo Olympics, there seems to be a change for the better. Less than 2 months  before the opening ceremony a survey  suggests support for the contentious Games is rising

With  48 percent in favour of cancellation and  50 per cent of respondents wanting the Games to be held, there appears to be a head start by 2% at the moment,  with  Postponement not given as an option.

As Covid  infection rates in Japan gradually seem to be  falling, one still must bear in mind that the countries Vaccination rollout has been unfortunately slow

Prime Minister Yoshihide Suga’s government has taken a beating in opinion polls over ambiguity and volte-face statements regarding the pandemic, with authorities facing flak for not moving quicker on vaccinations.

A decision is yet to be taken by Olympic organisers on how many spectators — if any — will be allowed to attend the Games.

Another 31 percent were in favour of cancellation, while 24 per cent called for another postponement, the poll found.

Organisers have consistently ruled out another postponement, and Tokyo 2020 chief Seiko Hashimoto recently made a statement that only a catastrophe preventing most delegations from attending the Games would cause their cancellation. It remains to be seen whether all countries are progressing as the Tokyo Olympic organizers would expect or if there is still a possibility of a third wave beginning in some countries in the next few weeks.