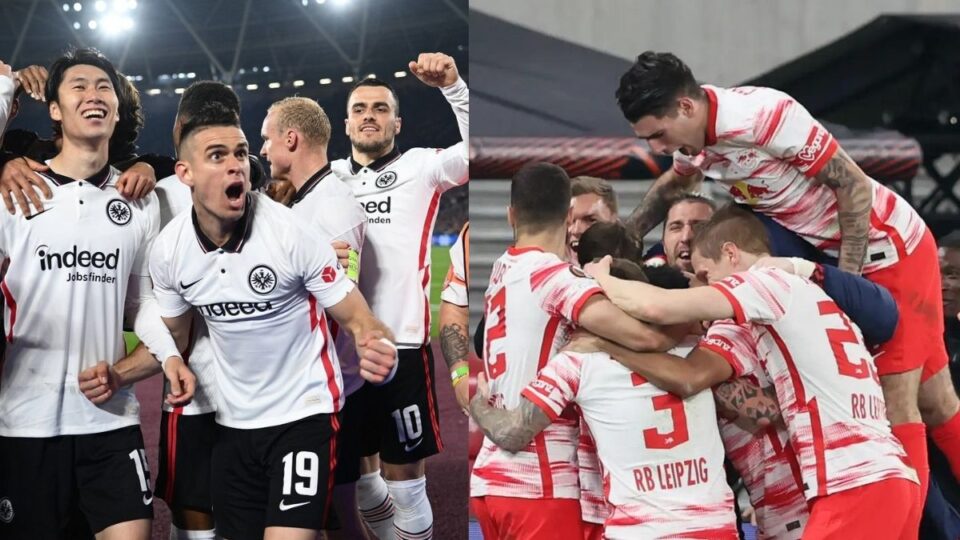 We have reached the last 4 stage (semifinal) of the UEFA Europa League 2021/22 and the first leg has already summed up with two teams carrying an advantage in the 2nd leg.

On Thursday night, West Ham welcomed Eintracht Frankfurt on their home turf in the London Stadium for the 1st Leg. Simultaneously, the German side RB Leipzig hosted the Scottish side Rangers at the Red Bull Arena.

Soon after the 2nd half begin, Daichi Kamada scored to restore Frankfurt’s 1 goal lead, which also turned out to be the winner. Thus, David Moyes’ men have a deficit of 1 goal to chase in the 2nd leg which will be played on 5th of May.

Simultaneously, the German side RB Leipzig hosted the Scottish side Rangers at the Red Bull Arena. The host dominated throughout the game and started to show their threat in the second half. Nkunku spurned a great chance when he blazed over an empty net before he nodded over at the far post.

While Angelino’s volleyed a wonderful goal from a corner, while Kent had Rangers best chance but he drilled it wide. Thus, Leipzig now carries a narrow 1 goal lead into the 2nd of the semifinal to be played on 5th of May.

Both the German sides got better off the British sides in the 1st leg. Thus, the stage could be set for an all-German final.