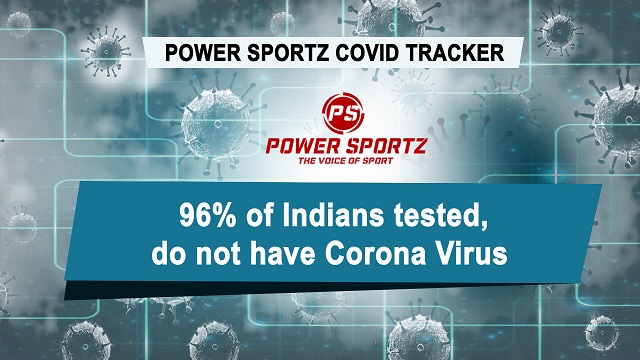 As the demand for more and more testing by private labs increases, the ICMR has already approved as many as 200 government and private labs for COVID-19 testing through RT-PCR machines and is in the process of identifying more research institutes and medical colleges, which can be included in the network. India’s apex medical body intensified random sampling including people who display flu-like symptoms but don’t have any history of travel to outbreak zones to determine whether community transmission is taking place. Asymptomatic direct and high-risk contacts of a confirmed case will be tested once between day 5 and day 14 of coming in his/her contact, the notification added

96 % of Indians tested, do not have Corona Virus! ..Click here for video

The above data clearly indicates that more people in India could be suffering from other viral influenza-like ailments, rather than the Novel Corona Virus, or are simply not testing positive for the Virus. While India can do with more testing,  we have tested far more than many Western European countries like Belgium, Netherlands, Sweden, Portugal, Norway, where the conversion rate of positive cases is upwards of 20%.

Whether India’s current favorable data will change in the coming weeks, remains to be seen, though some are of the opinion that this trend should change, not so favourably.

The demand for more and more testing in India by the Pharma and Healthcare sector needs to be scrutinized further to decipher whether there is any logical reason to believe that the existing ratio of a 4% conversion of positive cases, will drastically change considering the fact that the current set of tests conducted have focused largely on symptomatic patients with a higher probability to have tested positive, vis-à-vis random testing which would also cover asymptomatic patients, which may even alter the ratio to be less than 4% of a conversion rate. What is more important to understand is if, with more testing, better outcomes can be managed!

Sometimes,  the theory of Economics can prove to be dangerous Science!