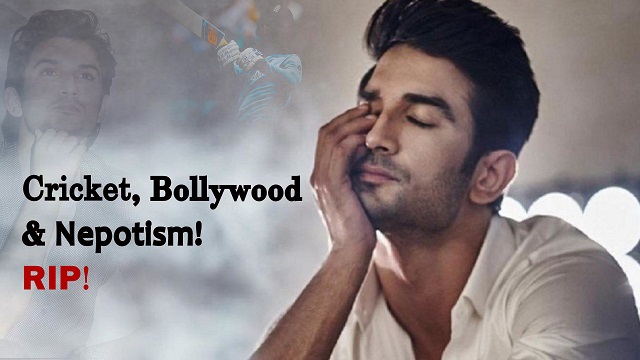 Leaders are developers, team builders, imaginers, culture caretakers, roadblock removers, and inspirers. Their success depends on enabling the success of others. The recent death by suicide of 34-year-old angelic  Sushant Singh Rajput has revealed that leaders in the Bollywood industry, or better termed ‘self-appointed gatekeepers of Bollywood’ measure their success by the failure of others! Sushant s angelic smile was only a façade camouflaging the demons that were made to play in his mind.

Nepotism is a disease that cannot be transmitted but can only be inherited. But, when it gets institutionalized, it gives birth to a separate industry. Sports & Bollywood, two of the biggest industries in India, seem to be having a common thread!

Power with zero accountability is an inherited privilege which a few enjoy in the business of Bollywood, which has a great resemblance to the Sports edifice that exists in the country. Take, for instance, the outright rejection of the new Sports code by the Indian Olympic Association and the National Sports federations, using ‘threat to the autonomy of sports ’, as a reason. It is a clear indication of the unlimited discretionary powers with Sports administrators in India. The draft proposal of the new sports code included barring of ministers, members of Parliament and Legislative Assemblies and government servants from holding office in National Sports Federations and the Indian Olympic Association, tenure restrictions were also imposed with an age cap of 70 years. The resistance to an age cap amongst sports administrators and the ageless Bollywood stardom enjoyed by a few, strikes a similar chord!

The film industry’s power to decide who will be declared a star and who should be left out has an uncanny similarity with the way Sports awards are conferred in India. ‘A bit of acknowledgment from your folks could be a nice feeling’, was what Sushant Rajput had said on asked why he thought he did not get an award for his iconic performance in his portrayal of MS Dhoni, in the film. The cynicism that is seen in the distribution of film awards is similar to the ambiguity and the fishbowl of controversies that we see every year, during the conferment of the Arjuna Award. Favoritism in recommendations by the Sports federations coupled with the Government’s ambiguous award structure is similar to the doling of awards to the ‘Bollywood privilege club’ by ‘self-appointed gatekeepers’ of the industry.

BCCI’s monopoly over cricket in India, with its recent gag order on its employees barring them from speaking to the media, with a threat to terminate contracts if not adhered to, is almost identical to a talented and independent-minded actor with no father figure, falling out with an influential producer. You also get into the ‘bad books’ of others! And the cricket bodies recent ‘defending’ of cricketers who failed to show up for their dope test, is like the Bollywood’s ‘Bois-Locker-Room’, that owns the high stake table where the game is played, and enjoyed by the few, albeit fixed!

Stories now public of successful Indian Cricketers feeling suicidal brings us to the similar question that is being asked about Sushant Singh Rajput, whether the depression was caused, or was the reason for the suicide! One would shudder to think about the mental health of the aspiring ones!!!

Another precious life lost amongst the many that the country is already reeling under! We seem to be losing the strength to handle it further. Our minds are stretched enough to ruthlessly teach us that things cannot go back to its old dimensions!

Anyone that has a monopoly will pretend that they’re in incredible competition. A collective movement from civil society is what is required to break the monopoly of established reality and define what is real!

RIP Sushant Singh Rajput! You will be missed forever!