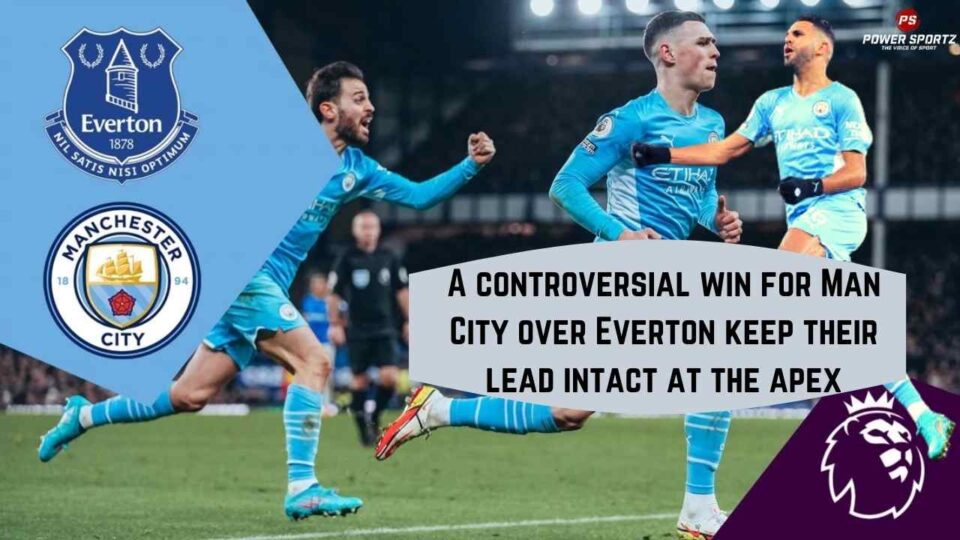 A gift was served to the Man City forward Phil Foden by the Everton defender Michael Keane which eventually resulted in the only difference separating the two sides. While Goodison roared as they felt cheated by VAR for not awarding them a clear penalty.

The Toffees started the game with high intensity to put some pressure on the champions, who resisted it. Meanwhile, City were unable to keep their shots on target in the initial half. Only Kevin De Bruyne’s shot seemed to be fired at Pickford, who was comfortable in dealing with it.

On the other hand, the home side had few good chances but they somehow failed to capitalize on it. Moreover, Recharlison’s instinctive shot at Edison turned out to be their best chance of the game.

Both the teams tried hard enough to break the deadlock but were inadequate to do so. Thus, the first half scoreline read as Everton 0-0 Manchester City.

How Man City got lucky over Everton?

The second half started in a similar fashion as the first one and pressure was on City to keep their lead intact. Pep’s team unfold their true colours in the 2nd half and it was now Everton’s turn to resist the attack.

While Fran Lampard’s boys did quite a good job to frustrate City’s forward line by not allowing any space in their box. While Jordan Pickford made an excellent double save from shots of De Bruyne and rebound of Bernardo Silva.

However, the traffic kept increasing to threaten the home side’s net, which ultimately turned out to be largesse. Thus, now City’s only job was to maintain their minute lead. But things always don’t go as you plan and the Sky Blues were in trouble moments later when Rodri tried to use his hands to keep the ball on his radar.

After a long 2 minutes check, VAR made him a lucky boy by not awarding what looked like a certain penalty.

Thus, the match ended in favour of Man City as they secured another win at Goodison by a goal to nil.

Pep’s Man City have now won 10 consecutive games against Everton. Making it to be his joint-highest (vs Watford also 10) tally against an opposition.

Meanwhile, dark clouds of relegation now mount over The Toffees. The Merseyside club has only 22 points in their 24 Premier League matches this season. This is their lowest tally at this stage of a league campaign since 1929-30 when they were eventually relegated from the top-flight.

Pep Guardiola was quite happy to secure all 3 points from the game. During the post-match interview, Pep said

“(Over) 90 minutes we were better. The second half was much better.”

“We were patient. In the second half we conceded some counter attacks but we were much, much better and at the end we deserved to win.”

On the other hand, Frank Lampard felt his team was robbed by VAR. After the match the Everton boss said

Said Lampard on whether his side should have been awarded a spot-kick.

“The decision is incredible, incredible, and that loses us the opportunity to get what we deserved.”

What’s next for Manchester City and Everton?

Everton will welcome the club of the fifth tier of English football, Boreham Wood for their 5th round FA Cup clash.

Meanwhile, Manchester City will make a trip to Weston Homes Stadium for their 5th round clash against the Championship side Peterborough United.

India forced to replace Ruturaj Gaikwad in the T20 Squad