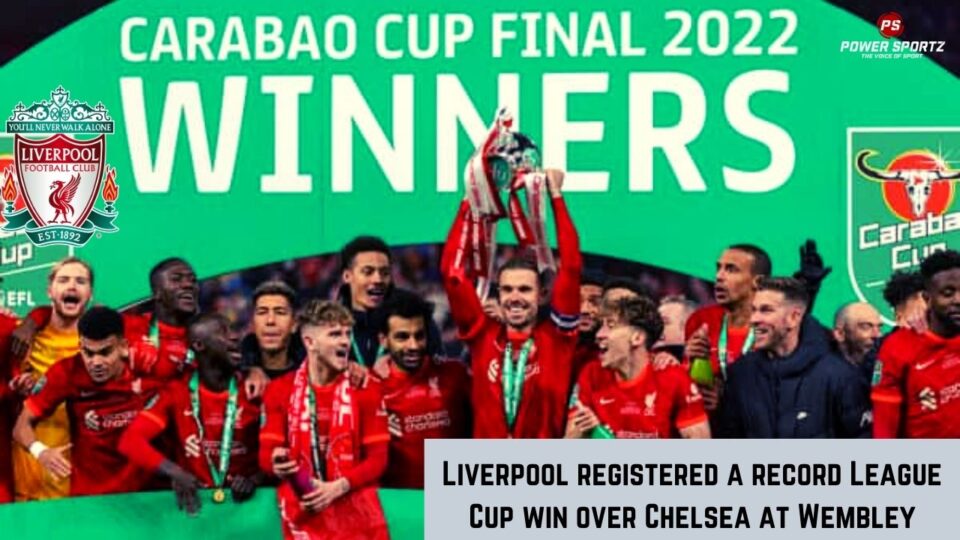 Liverpool claimed their record 9th League Cup title and become the most successful English club in the EFL / Carabao Cup tournament by thumping Chelsea on penalties.

Before the kick-off, Thiago Alcantara was initially named in the starting XI for Liverpool but unfortunately was ruled out sustaining an injury during the pre-match warm-up.

As a result, Harvey Elliott was being named as the replacement for the Reds no. 6. Right from the first whistle blew, the game had a nerve intensity in the air. Both the teams were out on an attacking track. The Reds and the Blues kept creating chances only to find themselves guilty for not capitalizing on it.

Starting with Christian Pulisic, who almost scored in the starting minutes of the game but Caoimhin Kelleher was there to rescue Liverpool. While Mason Mount’s curler struck just wide of the post.

Meanwhile, Mendy kept Chelsea in the game by pulling out an unbelievable double save. Keita struck the ball beautifully which was followed by a brilliant diving save from Chelsea’s goalkeeper. Moreover, the ball fell on the feet of Sadio Mane, who again strikes it on the follow-up but Mendy was somehow able to make a save again.

Thus, both sides felt they should have had the lead. However, the finals are never easy to score early and the game stood at 0-0 as the halftime whistle blew.

The controversial VAR & the story of the second half

The second half was full of drama just like the first one. Mason Mount couldn’t believe when he struck on the post from a close range in the early minutes of the 2nd half.

Meanwhile, Liverpool thought they had their lead when Matip headed past Chelsea’s net from a set-piece. However, the celebrations were ruined by VAR’s controversial decision. While Thomas Tuchel kept celebrating on the sidelines only to find out later about the raised flag for off-side.

While Lukaku almost had the last laugh but Kelleher had there plans. Thus, the game eventually led to one of the most entertaining non-goalscoring matches after 120 minutes couldn’t separate the two sides.

Penalty shootout was on the cards and Chelsea’s spot-kick specialist was called upon to win them another trophy. After 20 perfect spot-kicks, the game ultimately went down to goalkeepers. The Reds 23-year-old youngster was able to calm his nerves as he struck past Kepa. However, the Blues substitute goalkeeper fired the penalty as it was a goal-kick.

The Liverpool boss was extremely happy with how the game went on and the result. During the post-match interview, Jurgen Klopp said

“Absolutely great to win it like this. We called it the people’s cup but the whole journey was a squad journey and that’s what I love most about it.”

Meanwhile, Thomas Tuchel was disappointed and unhappy with how things went in the penalties. While the post-match interview the Chelsea boss said

“The players know and we did it before. It’s a nice subject now for you to make headlines but mistakes happen. I do mistakes, Edou did a big mistake and almost got punished. It makes easier if we have a big feeling but blame me as I take the decisions.”

What’s next for Chelsea and Liverpool ?

After celebrating their 66th trophy, Liverpool will now prepare to welcome Norwich for the 5th round of FA Cup. From one domestic cup to another, the Reds will defiantly be looking forward to advance in the next round.

Meanwhile, Chelsea will make a trip to Kenilworth Road to face the Championship side Luton Town.