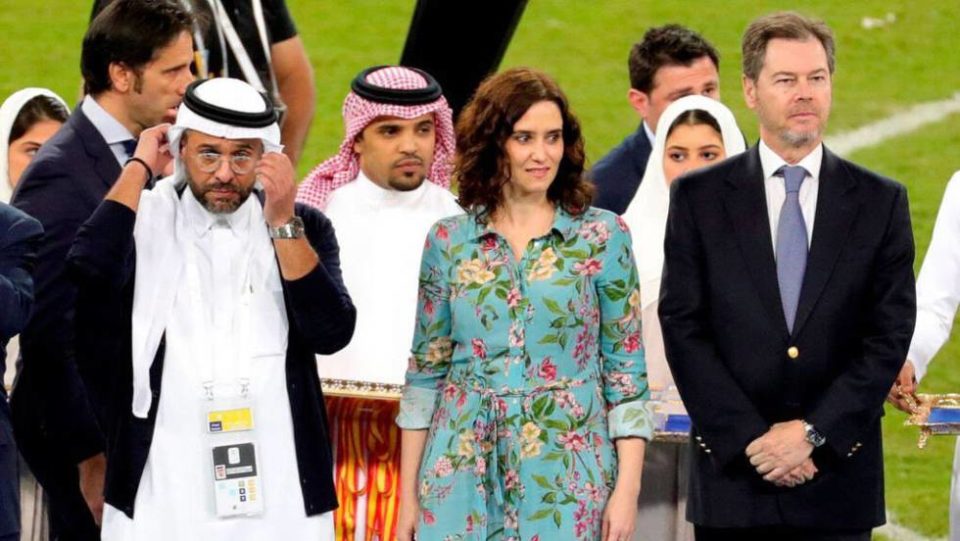 Criticism is increasing against the regimes that wash his image with sporting events. The last example has meant a resignation in the Spanish Football Federation

The women who went alone to the field were able to mix among the public during the Super Cup . King Abdullah Stadium, in Jeddah (Saudi Arabia), was mixed in those three games. They came out in the photos, smiling, with painted faces and scarves on their heads. The president of the Community of Madrid, Isabel Díaz Ayuso, went down to the field without a veilto close the ceremony after the final of the championship, sponsored by the Spanish Football Federation and in which between the 8th and 12th four first division teams participated (Valencia, Real Madrid, Barcelona and Atlético de Madrid). After the event, another match was held. They, who are allowed to enter the stadiums for just a year, had returned to the restricted areas. There is no official confirmation of whether these images represent a change in criteria or not, or for how long. In Saudi Arabia there is no freedom of the press, the death penalty and torture govern and human rights and, in particular, women’s rights are violated .They have restricted movements, must have the permission of a male in the family to marry and in most cases lose custody of their children if they divorce. During the championship there were women in prison for trying to defend equality.

There were no statements by soccer players or politicians displaced to Jeddah to ask for the release of these women. The media, in Spain, debated whether Díaz Ayuso’s gesture was a challenge to the regime or simply a normal stamp because the restrictions on local citizens do not operate for Westerners. The sports newspaper Marca published on the 12th on the cover the image of a Saudi marriage. He, smiling, with Atlético’s shirt; she, holding the Real Madrid shirt with a niqab that only left her eyes exposed. It did not include any headline alluding to the situation of women. After the controversy opened in social networks, the newspaper made an editorial on the Internet:”The image is so powerful that I didn’t need a headline,” he said. “We have just shown the ordinary. The usual. Reality. The crude reality”.

The transfer of the Spanish Super Cup to Saudi Arabia, which will report 120 million euros to the federation for three years, once again puts a question on the table: should football be neutral before countries that do not respect human rights? Can you ask the sport what is not claimed from diplomats, politicians or companies?

The controversy is neither new nor exclusive to this sport. Almost a century since the 1934 World Cup in Italy, which was promoted by Benito Mussolini, the first to use football for political propaganda. Since then they have been held from forums to discuss education in countries that segregate students to the university to macro-concerts in places where they are sentenced to death. Qatar will host the 2022 World Cup , the country of petrodollars that violates human rights and whose candidacy was imposed on those of Australia, the United States or Japan. NGOs ask, with little success, that democracies avoid participating in these events. They denounce that they are a whitening of reality, that things do not improve (or even get worse) when the bulbs are removed. They call it sport washing (sports whitening).

The Spanish Football Federation defends its visit. “We are going to collaborate with Saudi football to serve as a tool for social change and men and women will benefit,” explained its president, Luis Rubiales, before the matches. A spokeswoman adds that, in addition to asking for mixed zones, they have signed advise to create a women’s soccer league in the country, a project for which there are no closed dates yet.

The Super Cup enclave, however, opened cracks in the federation. The vice president of Integrity of the entity, Ana Muñoz, resigned in mid-December. Sources close to Muñoz point out that this competition was one of the reasons that precipitated his departure, to be held in a country that does not guarantee human rights or specifically those of women. The former vice president had shown her objections and communicated her decision not to travel with the entourage. According to her environment, when she was the general director of Sports, she was not at events in countries where human rights are not respected.

“I think that focusing on where women and men sit in the countryside is very superficial,” says Madawi Al-Rasheed, a visiting professor at the London School of Economics. Al-Rasheed, Saudi, has restricted access to his country by publishing books critical of the regime. “The federation has gone to a country where they put people in jail just for a tweet. They should not be there to legitimize a repressive regime. His justifications are trying to please his audience in Spain, but it doesn’t work in Saudi Arabia, ”he rejects. “Sports organizations should ask for the freedom of women activists or boycott events, but they don’t, now or before.”

The great precedent for that pressure asked by Al-Rasheed was the 1995 Rugby World Cup in South Africa. Nelson Mandela, already as president, transformed it into an element of reconciliation between whites and blacks. “During apartheid, there was a total boycott of South African teams in all sports. It was an internationally supported measure that had a real political impact of censorship of the regime. He sent them the message of ‘you are the pariahs of the world and we are going to punish you, but if you end this injustice, we will give you the candy that we now deny you ”, explained in 2013 the writer and journalist John Carlin to this newspaper about that episode , which he portrayed in the book Invictus .

The next appointment in Saudi Arabia is the celebration of the G20. Three NGOs that the country vetoes the entrance to do their research – International Amnesty, International Transparency and Civicus – will not participate in the summit. “We do not want our name to be associated with that country,” explains Johannesburg Masana Ndinga-Kanga, Civicus spokesperson for the Middle East and Africa. “It is a distraction so that the international community does not see all that violence.” “If they do not allow us to investigate, we will not attend acts that bleach their terrible history,” adds Carlos de las Heras, head of the Saudi Arabia area in Amnesty. They seek, in short, to avoid getting a goal.

“They only help my sister denouncing the abuse”

Loujain Alhathloul has been in prison since April 2018 for defending women’s rights in Saudi Arabia. At 30, she is the best known activist of the reprisals for protesting rights violations and calling for changes in the country. The number of total incarcerated is unknown. Alhathloul was accused of being a traitor and a spy, of “undermining the security, stability of the kingdom and its social peace and damaging its national unity.” She was one of those who led the movement so that women could drive, allowed by the regime since 2018. Her family reports that she has been tortured and sexually harassed since she is in prison. “They electrocuted her and forced her to kiss other women,” said one of her five brothers, Lina Alhathloul, 24, from Belgium. Parents can visit her and talk to her once a week. The younger sister criticizes that events like the Super Cup are dangerous because “it is what all people see, a whitening that hides torture and the police state in which people live. It facilitates them to continue with their human rights violations without being questioned. ” Asked about how these events could help her sister and other reprisals, she claims that those who participate “know what is happening and ask for the release of those imprisoned.” Lina Alhathloul does not defend a closed boycott: “It is not always good for the people of my country, thirsty for cultural and sporting events for years. But the only good way to participate is to bring all these human rights violations to light. The only thing that would help my sister is to report the abuse.