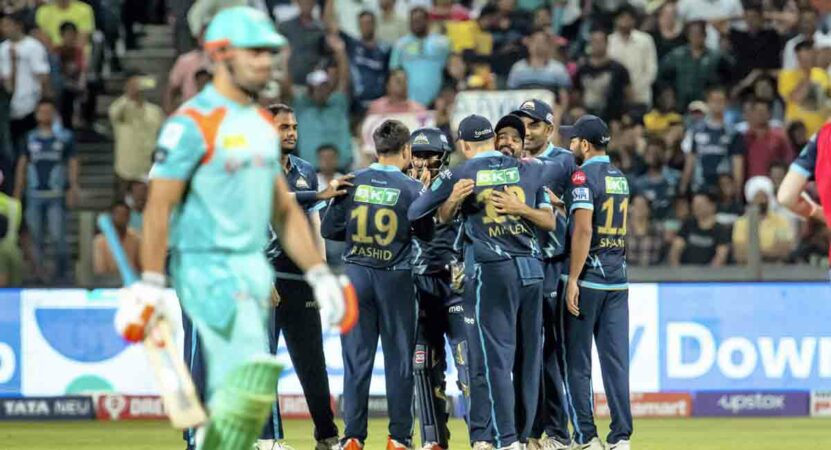 On May 10, the Gujarat Titans (GT) defeated the Lucknow Super Giants (LSG) by 62 runs at the Maharashtra Cricket Association in Pune in IPL 2022 Match 57. Gujarat not only completed a season-long double against Lucknow with this victory, but they also reclaimed first place in the points chart with nine wins and 18 points.

More importantly, GT became the first team to qualify for the playoffs as a result of the massive win. It was a much-needed win for Gujarat, who had suffered two losses in a row before coming into this match.

GT skipper Hardik Pandya won the toss and going against the trend he elected to bat first. The plan originally appeared to backfire, as the Titans lost their top-order and were reduced to 51/3 in the tenth over.

With stats of 2/26, Avesh Khan was the bowler of choice for LSG, while Mohsin Khan and Jason Holder both took one wicket each.

In reply, LSG got off to a cautious start thanks to openers KL Rahul and Quinton de Kock. But tragedy struck in the fourth over, and there was no turning back. With 27 runs, only Deepak Hooda managed to make an impression. Without him, neither of the batsmen could stand a chance against the Gujarat bowlers, with the most getting dismissed for single-digit scores.

Lucknow were swept out for 82 in the 14th over despite Avesh Khan’s incredible cameo of 12 runs off four balls.

Rashid Khan of Afghanistan was the best bowler for GT, with 4/24, while Yash Dayal and Sai Kishore both took two wickets each. As of now GT sits at the apex of IPL 2022 points table with a massive 18 points from 12 games.

LSG can also join GT in the playoffs as the new franchise is just 2 points & 1 victory away to become the 2nd team reaching IPL 2022 playoffs. Currently, LSG stands at 2nd spot in the points table with 16 points in 12 fixtures.

After the match the winning captain, Hardik Pandya said

“Really, really proud of the boys. It is a great effort to qualify before the 14th game in this league. To be honest, in the last game, we kind of thought that the game was over before it was over.”

Everyone stood by each other, and we had a get-together post game and made sure the vibe was always there. We were still on second spot and that meant we were doing something right.

“It looked like a tricky wicket, that’s how it’s played here for the last 2 or 3 games that we have played here. We knew it was a low-scoring game, we knew it was a tricky and challenging pitch, we bowled really well. Restricting a team under 150 on any pitch is commendable and the bowlers did their job. We should have batted a lot better.”

What’s next for Gujarat and Lucknow?

With only 2 league stage games remaining for GT they will next lock horns with the defending champions Chennai Super Kings on 15th May, Sunday.

While LSG will go one on one with the 3rd placed Rajasthan Royals on the same day in the night game at Brabourne Stadium in Mumbai.