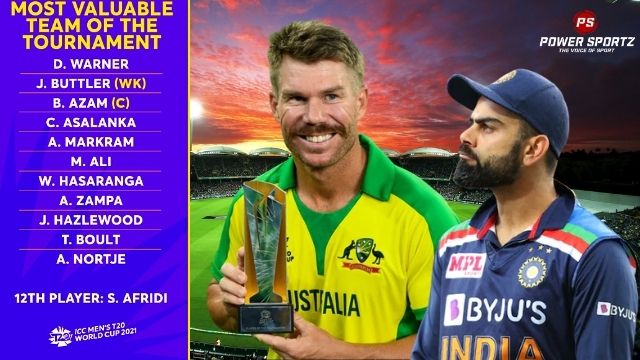 ICC has announced their most valuable team from the T20 world cup; The selection panel included pundits Ian Bishop, Natalie Germanos, and Shane Watson; as well as journalists Lawrence Booth and Shahid Hashmi; had the onerous task of cutting it down to just eleven players on the squad roster and a twelfth on the bench.

One of the panellist Ian Bishop; stated that “As with any team selection there will be varying opinions; and robust discussion on the final composition of the squad.” He further added that “The panel respects that; and we encourage the strong debate that will ensue.” later he added that, “This team was incredibly difficult to select over such a highly competitive tournament. Selections were based predominantly on the Super 12 onward to the final.”

Bishop expressed that, “As a panel; we felt that the combination of runs plus strike rate plus match impact for batsmen, to be decisive factors. We endeavoured to select players as close to their initial team position where possible. This intention was not always a reality, as some compromises had to be made.”

The team for the ICC T20 world cup!

India had an extremely disappointing world cup; as a result, none of their players have been able to make their mark in this squad. India plays their next T20 series on the 17th of November against the world cup finalist New Zealand. Who do you think will be able to win this three-match T20 series?