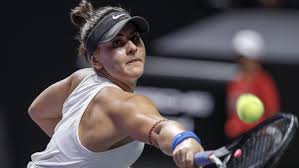 Canadian Bianca Andreescu who was nursing a knee injury has fully recovered. The knee injury forced her to miss the entire 2020 season. She intends to play the Australian Open in January, the 2019 U.S. Open champion has said.

Andreescu, 20, last played in a tennis tournament last year when she appeared at the WTA Finals in Shenzhen. Since then she retired with a left knee injury.

“I’m doing really well. The virus kind of pushed me back, and some little personal things here and there, but right now I’m good, I’m training hard … I’m really looking forward to 2021,” the Canadian told the Tennis Majors website.

“I’m perfectly healthy. I just really wanted to take time to build everything in my life, and I think this time off really helped me do that.”

World number seven Andreescu said she will be “100 percent” in Melbourne to play the year’s first Grand Slam.

“I wouldn’t say I am ready tomorrow to play a match because I am taking it step by step, but maybe in a couple of weeks I will be good,” she added.

“I don’t want to rush anything but I’m feeling good.”

Rafael Nadal came from behind to beat Feliciano Lopez and move into the third round of the Rolex Paris Masters with his 1,000th singles ATP Tour victory.

An exalted Nadal said: “I know it is a very special number, 1,000. Even if it’s not the same to celebrate something like this without a crowd.”

The Spaniard becomes the fourth player in the Open Era to reach the milestone – joining Jimmy Connors, Ivan Lendl and Roger Federer.