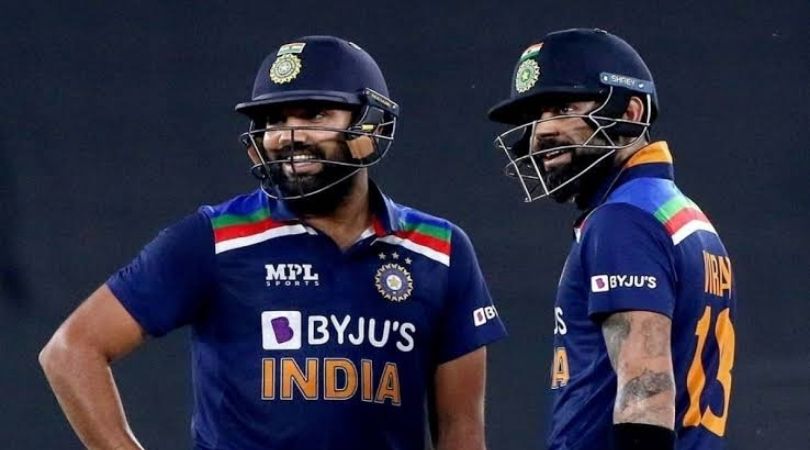 In the recent T20 series between India and England, Virat Kohli faced nine balls throughout the course of two innings. Off five of them, he tried to make limits. A four over wide mid-on and a six straight down the ground were two of them.

While the other three got him out twice and produced two classic Kohli boundaries. Perhaps it is true that this is not Kohli’s best strategy based on his T20 history.

Kohli does not, however, play alone. He bats at the top of India’s order. They must take the chances and either score fast themselves or force those in back. Thus, one thing is clear the Men in Blue wants everyone to adopt the attacking philosophy, and Kohli is no exception.

When questioned about whether Kohli’s new ultra-aggressive style is a team directive or a personal effort to get out of a rut, the Indian captain said:

“It’s a bit of both, we, as a team, we want to play in a certain way, and every player needs to buy into that thought process.”

“We, as a team, we want to play in a certain way, and every player needs to buy into that thought process. Otherwise, you know, it’s not gonna happen for you.”

“And all the players, all the batters, who are part of this squad, are willing to take that extra risk and go and see what extra they can do with the bat.”

“It’s important to find out within yourself, you know, to try and do different kinds of things. Unless you try it, you will never be able to find out [what you are capable of]. So I think it is something that we have been trying to do for a while now. Some days it might come off, some days it might not. But we don’t want to be afraid of going in and taking that extra risk. That’s how we’re going to learn as a team and that’s how we will move forward as a team. So it’s in everyone’s thought process, everyone is quite comfortable with that idea. So yeah, that’s the kind of direction the team is going to move in.”

India used to play T20s like a condensed version of ODIs, only taking chances by batting first when they were trailing in a series or in games they had to win.

However, this new management is subtly introducing radical concepts, like as its desire to treat ODIs as a continuation of T20Is.

“It is important for us to understand white-ball cricket properly,”

Rohit said, disagreeing with the notion that the upcoming ODI series will be of lower priority for India in a T20 World Cup year.

“I mean 50-over cricket is an extension of T20 cricket. You might take slightly fewer risks than you do in T20s, but we have to take risks. It is not as if we won’t take risks.

The fierce competition for slots is one of the main causes of players not playing freely and valuing their wickets too highly. Mixed messages cannot exist if the leadership wants its players to reach their maximum potential. Because of this, we do not anticipate that Kohli will face consequences for attempting to fulfil the team’s needs. Because of this, they are unlikely to modify their opinion of Kohli despite all the pressure coming from the outside, as evidenced by statements made by Kapil Dev, Virender Sehwag, and Venkatesh Prasad.

Eoin Morgan, who was a key figure in England’s adoption of the white-ball system, called India’s new attitude toward risk “unbelievably fantastic.”

Given their talent, India, in the opinion of Nasser Hussain, ought to reach every white-ball championship final.

Thus, one can say that team India might adapt to a more attacking style of play during the upcoming T20 World Cup later this year.