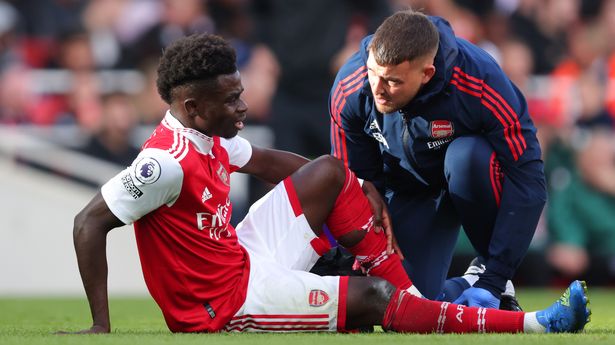 After being forced to leave Arsenal‘s Premier League match against Nottingham Forest due to injury, Bukayo Saka’s status for both England and Arsenal are now very uncertain.

The 21-year-old has started every game for Arsenal in the Premier League so far this year, but he was subjected to some rough treatment by Renan Lodi at the game’s opening moments on Sunday.

However, Saka helped Arsenal get off to a lightning-quick start by delivering a cross that Gabriel Martinelli just barely managed to head in at the Emirates after only five minutes. The Arsenal bench did not initially seem very concerned, but the England international was not moving at all smoothly in the opening exchanges.

After around 15 minutes, Saka collapsed onto the ground clutching his lower thigh, although he was able to continue for a short time after receiving medical attention. But the attacker’s impact was short-lived; just before the half-hour mark, he was forced off the pitch and was replaced by fellow countryman Reiss Nelson.

Although the extent of Saka’s injury is yet unknown, Mikel Arteta and Gareth Southgate will undoubtedly be worried while they wait for an update after seeing Saka hobble off the pitch.

Saka’s pass for Martinelli’s header gave him a total of five assists for the season across all competitions, in addition to his five goals, before he left the field and immediately headed down the tunnel.

The Hale End graduate, who has 148 games under his belt across all competitions, will be expected to secure a spot in Southgate’s World Cup team should he demonstrate his fitness.

When asked about Saka’s relentless schedule of games recently, Arteta responded that the 21-year-old must desire to play up to 70 games annually if he wants to be among the greatest.

“Look at the top players in the world. They play 70 matches every three days and make the difference and win the game,”

“You want to be at the top, you have to be able to do that. And if we start to put something different in the mind of a young player, I think we are making a huge mistake because then [he would] be like, ‘no, I don’t play now, on astroturf I don’t play’. I don’t want that.”

“I want them to be ruthless every three days. I want them knocking on my door [saying] I want to play, I want to win the game. There is no fitness coach in the world that is going to tell me that they cannot do it because I’ve seen it.”

“Seventy-two games and scored 50 goals. The players that score 50 goals do not play 38 games in the season, it’s just impossible.”

Additionally sidelined by injuries are Matt Turner, Oleksandr Zinchenko, Emile Smith Rowe, and Mohamed Elneny for Arsenal, but the latter has recovered from his hamstring issue much more quickly than previously anticipated.