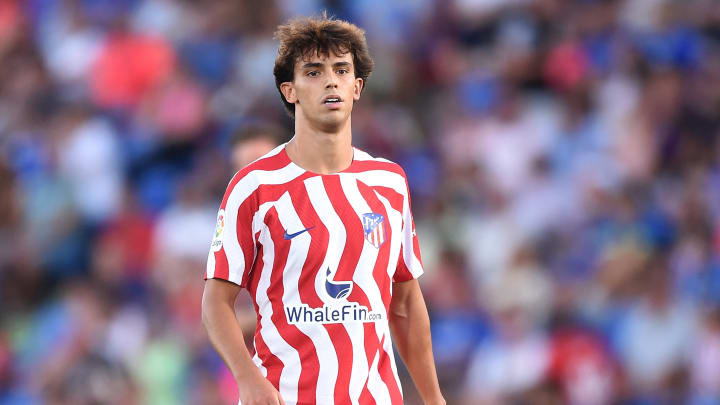 According to reports, during the summer transfer window, Atletico Madrid rejected an £85 million bid from Bayern Munich for Portuguese forward Joao Felix. Since coming at the Wanda Metropolitano for a £114 million transfer fee from Benfica in the summer of 2019, the 22-year-old has fallen short of his nine-figure price tag.

Felix has contributed 31 goals and 18 assists in 126 appearances for Diego Simeone’s team, helping them win the La Liga championship in 2020–21, however he has never scored more than eight goals for the Rojiblancos in a season of the top division.

This season, there is fierce competition for attacking positions within the Atletico ranks, with Felix vying for spots in the starting XI with Antoine Griezmann, Alvaro Morata, Angel Correa, and Matheus Cunha. There have been rumours that Felix wants to leave Atletico Madrid in 2023 after starting just five La Liga games and two Champions League games this season.

According to a recent rumour, Manchester United was reportedly interested in signing the Portugal international, who was reportedly aiming to leave the club as early as January. However, Marca claims that Atletico Madrid rejected Bayern Munich’s efforts when they made an offer of £85 million for the attacker’s services in the summer.

The report indicates that the German champions may make another attempt to sign Felix given that he wants to leave Atletico “as soon as possible,” despite the fact that Julian Nagelsmann’s team was rejected during the summer.

Will Joao Felix be on his way out of Atletico Madrid next summer?

The former Benfica starlet’s Wanda Metropolitano contract runs through 2026, but he was once again relegated to the bench for the weekend’s 3-2 La Liga loss to Cadiz. Atletico started Morata and Correa up front, but after just 10 minutes due to injury, the former was replaced by Cunha, putting Felix on the bench for the first half.

Almost saving the Rojiblancos a point, the 22-year-old came on for Correa at the hour mark and scored two goals in short succession in the 85th and 89th minutes of the game.

Felix’s first goals of the year, meanwhile, were ultimately in vain when Cadiz’s replacement Ruben Sobrino gave the home team the lead again in the ninth second-half minute.

Simeone expressed his satisfaction with Felix’s influence to DAZN, saying: “Joao came in to do what he knows how to do, and he did it very well.

“He scored a lucky goal but with the initiative to generate danger, he was the most dangerous of the forwards that were in the short time he entered. He scored a great goal, the second is a great goal. Hopefully he can keep that because in reality that is the player we all want.”

Real Madrid are nine points ahead of Atletico in the La Liga standings after their defeat of Cadiz, and Simeone’s team is now preparing to play Porto in Tuesday’s Champions League match after already being eliminated from the competition.