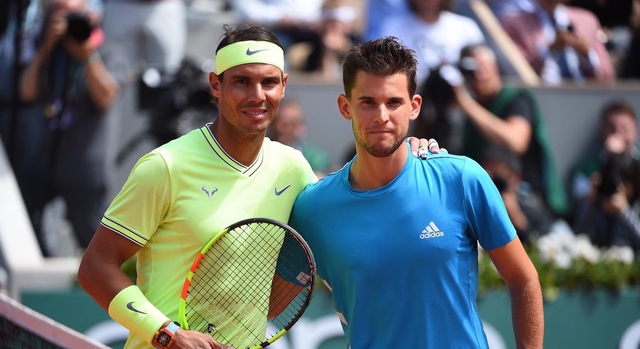 Dominic Thiem outclassed Rafael Nadal and got the better of him as he mastered the tiebreakers against the world no. 2 on Day 3 of the ATP Finals. On the other hand, defending champion Stefanos Tsitsipas also won Tuesday.

Thiem managed to put up a great show beating the 20-time Grand Slam champion Nadal in straight sets to secure his berth in the semifinals. While Tsitsipas outlasted tournament newcomer Andrey Rublev in the evening match at an empty O2 Arena.

Thiem last played Nadal in the Australian Open quarterfinals in January before clinching this 7-6 (7), 7-6 (4) win on his fifth match point. Even in January, the Austrian player prevailed after winning three tiebreakers in a tight four-set match.

“If I want to look for mistakes or for things I didn’t do right, I think I wouldn’t find many,” Thiem said.

Thiem, the US Open winner, opened his group play in the season-ending event with a three-set victory over Tsitsipas on Sunday and qualified for the semifinals when Tsitsipas won 6-1, 4-6, 7-6 (6), handing Rublev his second defeat.

Although in their opener, Nadal beat Rublev in straight sets, he missed a chance to qualify with a match to spare. He will next play Tsitsipas on Thursday with a semifinal place at stake. Nadal has never won the ATP Finals, a big disappointment for the tennis great. Nadal praised Thiem but described the match as “very equal.”

“Both of us played at a very high level. He deserved to win because he played a little bit better at some key moments,” Nadal said. “I am much more confident now with the level of tennis that I am playing than a couple of days ago.”

On Wednesday, top-ranked Novak Djokovic will square off with Daniil Medvedev, and both players won their opening matches. Alexander Zverev and Diego Schwartzman, both are in search of their first victories as they lock horns against each other.