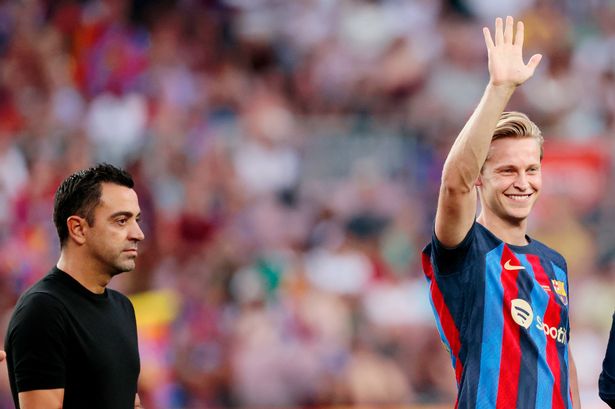 According to reports, Barcelona has threatened to file a criminal complaint over the contract extension Frenkie de Jong signed in 2020. Manchester United’s protracted and arduous pursuit of the 25-year-old continues to dominate rumours regarding his future in the transfer market.

It is reported that the Red Devils and Barcelona have struck an agreement for a £63 million contract, with the possibility of add-ons raising the total to £71 million.

Despite a contentious disagreement about his pay, Erik ten Hag’s team has not yet been able to persuade the Netherlands international to quit Camp Nou.

De Jong was one of numerous players who agreed to delay their wages during the COVID-19 outbreak, but he is now requesting the money that is still owed to him. De Jong is standing his ground despite the Catalan giants allegedly owing him up to €18 million (£15.1 million). The one who are eager to move the former Ajax player to help balance the books.

However, Barcelona may potentially take a more drastic turn in the matter. As The Athletic reports that the Blaugrana have brought up the possibility of taking legal action in relation to De Jong’s contract.

The midfielder initially committed to a five-year contract at Camp Nou upon his debut in 2019. And under Josep Maria Bartomeu’s leadership, a two-year extension was reached in October 2020.

In 2021, when Joan Laporta took over again, Bartomeu and his board stepped down, and this month, Barcelona supposedly received a letter from the club claiming to have discovered evidence of criminal behaviour in his 2020 extension.

According to the source, Barcelona will next ask De Jong to consent to cancelling his current terms and returning to the agreement he initially signed with the club in 2019 after accusing the previous board of malfeasance.

Bartomeu has consistently maintained that he followed the rules while running Barcelona, and the necessary authorities, as well as La Liga, approved of De Jong’s new contract.

Along with De Jong, Clement Lenglet, Marc-Andre ter Stegen, and Gerard Pique also had their contracts extended, but it is unknown if they have also received legal repercussions threats.

Raphinha, Jules Kounde, and Robert Lewandowski were all acquired by Barcelona for more than £100 million, although they have not yet been officially registered with La Liga. Barcelona declined to comment to The Athletic on the story.

De Jong scored for the Blaugrana in Saturday’s 6-0 hammering of Pumas in the Joan Gamper Trophy. He has 13 goals and 17 assists in 140 competitive games for Barcelona.

Laporta recently affirmed to reporters that he wants the Dutchman to stay at the club, saying:

Man United’s pursuit of De Jong has been rumoured to be hijacked by Chelsea, but Thomas Tuchel recently downplayed the possibility of his team making a significant summer midfield acquisition.