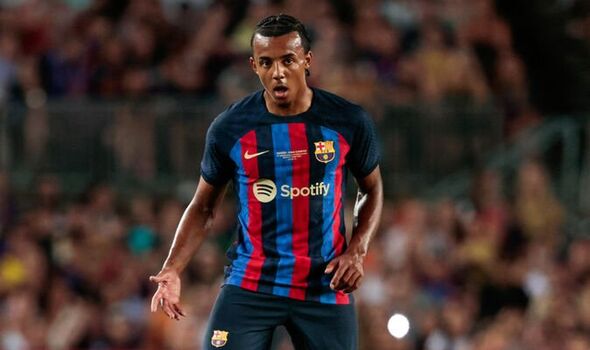 According to a source, Barcelona must fund €20 million (£17 million) before their upcoming match in order to sign Jules Kounde. The 23-year-old signed a five-year contract at Camp Nou on July 29 after moving from Sevilla for an estimated €50 million (£42.25 million).

Kounde has missed Barcelona’s first two La Liga games of the new season, but the club is now unable to sign him due to Barca’s well-known financial issues. Summer enlistments Raphinha, Robert Lewandowski, Andreas Christensen, Franck Kessie, and Raphinha have all registered while Kounde is still waiting to make his competitive debut.

Before the transfer window closes on September 1st, Barcelona will need to raise £17m to sign Kounde. According to the source, Barcelona is attempting to sell up to five players, including striker Pierre-Emerick Aubameyang.

The 33-year-old, who only joined Camp Nou in January on a free transfer from Arsenal, is reportedly the subject of advanced negotiations between the Catalan giants and Chelsea regarding a permanent contract.

According to a recent rumour, Barca and Chelsea are negotiating a fee between £15 million and £25 million, with the latter hoping to include Marcos Alonso in a player-plus-cash deal and the former preferring to take a straight cash payment.

While another forward who might be moving this summer is Memphis Depay. Serie A powerhouse Juventus has expressed interest in the 28-year-old.

In a news conference before Barcelona’s 4-1 victory against Real Sociedad on Sunday, Xavi made a suggestion that both Depay and Aubameyang are among the players who might leave the team in the remaining 10 days of the transfer window.

“The transfer market ends on [September 1] and we don’t know what will happen. Auba and Memphis are still here, so tomorrow we will use them. But the priority is to register Kounde,”

Samuel Umtiti, a defender, is allegedly nearing a season-long loan move to Lecce of Italy after passing his medical examination. Umtiti, 28, is a Frenchman.

However, Martin Braithwaite and Sergino Dest’s futures are still uncertain because Barca is supposedly eager to unload both players even if they would prefer to stay at Camp Nou.

Dest, 21, has already drawn interest from Manchester United and Chelsea, while Braithwaite, 31, has been mentioned in connection with a prospective move to Mallorca.

“It doesn’t bother me that players don’t want to leave, everyone looks to their future; it bothers me not being able to have Kounde,”

“Kounde is a great leader and a great player. Hopefully he shows it soon. He has trained very well, I see him in good spirits, but we need to sell players to be able to register him.”

Barcelona will play a charity match against Manchester City at Camp Nou on Wednesday before returning to La Liga play on Sunday when Real Valladolid comes to Catalonia.