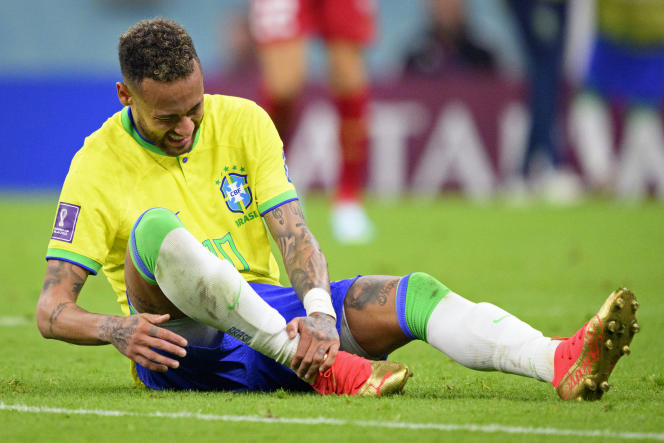 Neymar, a renowned forward for Brazil, has recently suffered a fitness setback due to illness and ankle ligament injury. After suffering an ankle injury in the Selecao’s previous match against Serbia last week, the 30-year-old was unable to participate in the team’s 1-0 World Cup victory over Switzerland on Monday.

Neymar is a serious doubt for Friday’s match against Cameroon after the team doctor for Brazil, Rodrigo Lasmar, verified that the Paris Saint-Germain forward has lateral ligament injury to his right ankle as well as a slight bone edoema.

Neymar reportedly told the team doctor he felt sick and had a headache before the match against Switzerland at Stadium 974, thus, he was unable to watch his teammates earn all three points.

The 122-cap player had to watch the five-time world champions from the comfort of his hotel room while wearing a compression boot to protect his ailing ankle. A flu-like illness is plaguing Neymar, according to Real Madrid winger Vinicius Junior, who had a goal disallowed in the second half of his team’s victory over Switzerland.

Vinicius Junior expressed his hope that Neymar can recover quickly.

“Neymar stayed at the hotel with a fever,”

“We are all rooting for him to recover quickly from illness and his injury.”

An updated on the injury of Neymar

An illness that spread across the Brazilian team over the weekend prevented Antony, Lucas Paqueta, and Alisson Becker from participating in training prior to the match against Switzerland. The trio recovered in time to play a part in Monday’s victory, though.

Neymar won’t likely be risked in Brazil’s final match against Cameroon because they’ve already advanced to the round of 16, but Selecao icon Rivaldo thinks Tite’s team will be able to function without their No. 10.

“The team has several other strikers who will undoubtedly come in an perform well, but Neymar is obviously the first choice,”

the 2002 World Cup winner told reporters via The Sun.

“The group is a strong group and these things happen in football, especially in a high-level competition like the World Cup. But the team is prepared with great strikers and Tite won’t have any problems.”

“We want Neymar 100% but if it doesn’t happen soon, we have others to replace him, a very strong team of 11 and a very good bench.”

Neymar has struggled with ailments throughout his World Cup career. He previously missed the 2014 semifinal due to a back issue, and he was unable to fully participate for Brazil in 2018 due to a foot injury.

Neymar will be trying to recuperate in time for the team’s last-16 match against either Portugal, Uruguay, Ghana, or South Korea from Group H if he misses the Cameroon game.