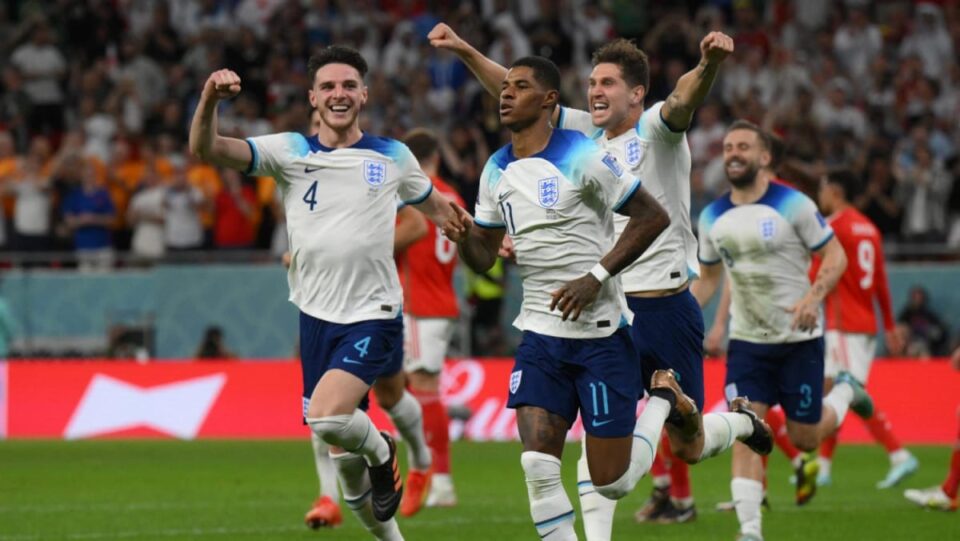 At the Ahman bin Ali Stadium, England defeated Wales 3-0 to win Group B and advance to the round of 16 of the 2022 World Cup, eliminating the Dragons in the process.

After a boring first half in the battle of the Brits, Marcus Rashford and Phil Foden scored twice in a minute, and the former added a second to put the cherry on top, sending Wales home in the group stages for the first time in 64 years.

Despite having the most of the ball in the opening phases, England was unable to penetrate the tenacious Dragons defence, even though they should have been ahead by one goal after 10 minutes. As one of four substitutions for the Three Lions, Harry Kane went deep to supply Marcus Rashford, but the Manchester United player blasted the ball straight at Danny Ward when one-on-one with the Wales goalkeeper.

Rob Page’s team was willing to watch as England passed the ball around, but they were had to make an unfavourable early substitution when Rashford’s vicious shot struck Neco Williams in the head in the 24th minute.

The confused Nottingham Forest player fell to the ground and then attempted to continue, but in the 36th minute, he was substituted for Connor Roberts due to a concussion.

Despite a quick England passing move that concluded with Foden shooting over the crossbar in the 40th minute and Joe Allen’s attempt from distance that flew high and wide in the fifth minute of first-half injury time, Wales’ defensive efforts were mostly untouched.

England 3-0 Wales: The Three lions into the round of 16

Brennan Johnson replaced the injured Gareth Bale in the second half, adding insult to injury for the Wales captain in the 50th minute. Bale is the Dragons’ star player.

After missing that golden opportunity in the first half when Foden was pulled down just outside the box, Rashford went up to take the free kick and slammed it into the top left corner of the goal.

Less than a minute later, the Three Lions unexpectedly increased their advantage after Rashford stripped Ben Davies of the ball in a risky position. Kane then found Foden at the far post, and the Manchester City player scored with a simple tap-in.

A deflection from Harry Maguire’s head made it harder than it should have been for Jordan Pickford to stop Kieffer Moore’s long-range attempt in the 56th minute for Wales, but the Everton goalkeeper dived to his right to make the save.

Rashford scored England’s second goal in the 68th minute, latching onto Kalvin Phillips’ long pass, cutting inside, and scoring through Ward’s legs for the Three Lions’ 100th World Cup goal. The stunned Dragons were helpless to respond to England’s rapid succession of goals.

In the 77th minute, with Southgate’s team in cruise control and unaffected by their neighbours in the defensive third, Ward dived low to stop a shot by Jude Bellingham.

The Three Lions breezed through to the knockout stages and are now preparing to face Group A runners-up Senegal on Sunday. John Stones had a great opportunity to make it four for England in extra time, but he squandered it by shooting over the bar from close range.

Brazil’s Neymar suffering from illness alongside an ankle injury